Share All sharing options for: The Cup's Heisman Winner 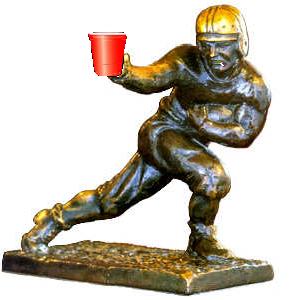 We've made it no secret as to who won the Cup's Heisman Trophy.  Ndamokung Suh, whose first name literally translates into English out of [OBSCURE AFRICAN LANGUAGE] as "House of Spears," will (not at all) take home another piece of hardware today, as our votes tallied up in his favor.  A breakdown of the points each one of us allotted to which players is after the jump. 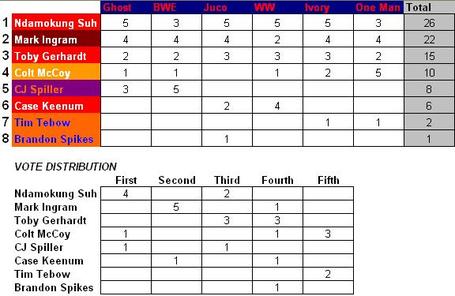 To the slow (RAZORED and Gonzohog), the numbers in the first chart aren't where they were placed, but rather how many points they were allotted.  First place votes earn five points, fifth place votes earn one, and if you can't figure the rest of this out--or if you really needed this explanation to begin with--I want you to immediately cease reading this website and direct your attention elsewhere, never to return.

Agree?  Disagree (this question can also be phrased as "are you an Alabama fan")?