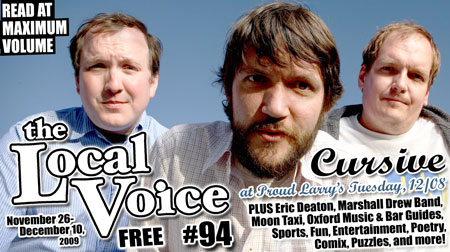 During the offseason, the seniors on our Rebel football squad came up with a moniker for their final season in Oxford: "unsatisfied."  The idea behind this was to suggest that last season’s nine victories—including victories over Florida, LSU, Auburn, Arkansas, and Texas Tech—weren’t enough.

But what, in this case, did "more" mean?  For many, it was a championship of some kind.  An outright SEC West Title, an SEC Title, and even a BCS Title were all a part of the offseason Rebel discussion.  Oxford, Mississippi hadn’t tasted a true SEC football title in decades, and with this offseason, that became palpable.

But it was not to be.  Losses to Alabama, South Carolina, and Auburn derailed any chance our gridiron Rebs would have to lay claim to a championship of some kind.  Folks were, and many still are, unsatisfied.

But is this dissatisfaction right?  Is it correct?  Is it justified?

Let’s be frank: we Rebels sorta let the media take us for a ride.  We got hot to end last season and convincingly defeated a top-10 team in a New Year’s Day bowl.  We were returning a large corps of experienced seniors who had all contributed greatly to our 2008-9 successes.  We had a quarterback who appeared to be the real deal.  The media was fawning over us and, despite our best Rebel instincts, we had ourselves convinced we were gonna do this, weren’t we?

So, should we remain "unsatisfied?"

Yes, as fans we should always want the best.  We should always yearn for our team to win every single game they play.  We should want championships.  But just because we don’t get them, even during a time when it looks like we reasonably could, doesn’t mean the season is a total wash.

This weekend, our Rebels will travel to the "gem" of Oktibbeha County: Starkville, Mississippi—a town which can boast a few strip malls, a university campus which looks like a couple of community colleges stitched together, and maybe two bars worth the effort.  There, they will take on the Mississippi State Bulldogs to once again end both teams’ respective seasons with the Egg Bowl.  Not only is Magnolia State football supremacy at stake here, but if the Rebels were to win this one, a berth in the Capital One Bowl is ours.

"What exactly does that entail," the uninitiated amongst you may ask.  Well, for starters, Orlando, Florida plays host to this bowl which means sunshine, warmer weather, and Disney World.  Secondly, the bowl is on New Years day and is televised nation-wide, once again giving our Rebels a coast-to-coast audience.  And finally, this game would likely be played against the Penn State Nittany Lions.  That’s huge.  We’re talking Big Ten brawn versus SEC speed; Joe Paterno—college football’s winningest coach—versus Houston Nutt—college football’s zaniest coach—in a matchup of elementary fundamentals; and Pennsylvania vs. Mississippi.  This would finally be an opportunity for we Rebels to get our shots in against the Big Ten.  This would help our bevy of seniors and their individual draft stocks.  This would help recruiting.  And finally, this would be a damn blast to attend.

Make no mistake; while not a championship, a Capital One Bowl berth and a subsequent victory would certainly be an improvement on last season.  I know it’s only one more win, but finishing a season 10-3, especially a season which was at one point 5-3 with any bowl appearance seeming unrealistic, would be another step in the right direction for a program which has seemingly done nothing but take steps in the wrong direction over the past decade.

But, let’s not put any horses before any buggies.  I am just as excited as any good Rebel fan about the prospects of another New Years Day bowl berth, but we’ve got to first take care of business this weekend.  Let’s take Starkville over.  Let’s have Kendrick Lewis, John Jerry, Shay Hodge, and Dexter McCluster end their SEC careers with a convincing victory.  Let’s remind the Bulldogs in maroon and white once again that, so long as Houston Nutt is in Oxford, we don’t have intentions on dropping a football game to them.  And finally, let’s earn that New Year’s Day bowl appearance.

Hopefully that is something about which we can all say we’re satisfied.