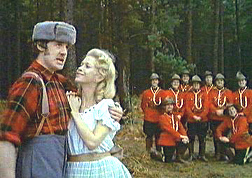 For this week, we are the gal, and UNA is that lumberjack... 'cept we ain't doin' it later.

Perhaps it's bad Karma.  Perhaps it's hubris.  Perhaps it's the lack of a consistent offensive line, a quarterback who makes foolish choices, and the failure of one of our receivers to emerge as Jevan Snead's legitimate third option.  But, whatever it is, it baked we Rebels a four foot wide and two foot deep beheamoth of a humble pie before reverse bear-trapping our jaws open in order to stuff it down our throats like an Indonesian boy stuffs wads of paper into your fresh new Nikes.

So, to avoid another bitch of a weekend she is bound to deliver, we're playing it safe this time.  Also, hating NAU is impossible.

So, here's to you, Northern Arizona University!  Located just north of the pristine Prescott National Forest, NAU's athletics programs are known as the Lumberjacks: an undoubtedly proud, Arizonan homage to the state's, err, rich logging tradition?  A tradition which, like many blue-collar'd and manly professions, makes the civil life--one which we blue-blooded Southern Aristocrats take for granted--possible.  Why, how are we going to write our novels without a desk upon which to do so, or paper through which we can tangibly recreate our innately creative and brilliant thoughts?!  And how exactly are we going to issue courts summons without a physical court house; one which uses lumber to hold up her undoubtedly magestic facade?!  And how, sir, are our physicians supposed to, ummm, remove shards of pine out of an idiot lumberjack's face without, you know, an idiot lumberjack?

To the NAU Lumberjacks, The State of Arizona's northern portion, and Michael Herrick's big-footed self, we at the Cup love you very, very much.