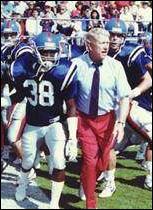 One of the great things about Billy Brewer was that he was able to keep it good and respectable against LSU.  The Bengals took seven against Brewer in his tenure, but he beat them a couple of times.  And one time, he beat them like the tacky nutria fur rugs they keep in their swamp-boat-houses.  Your history lesson is after the jump.

1992 was another season that would have been a lot better if we could forget half of it.  The first seven games included beatdowns at the hands of Georgia, Alabama, and - shudder - Vanderbilt.  The Rebels marked their first conference win over Arkansas in Little Rock 17-3, but the wind was not in their sails after a 10-31 setback to Alabama in Tuscaloosa.  The final four games of the season, however, would be played in Mississippi, and Coach Brewer's five-game season-ending win streak would begin like it ought to still - on Halloween night against LSU>

Mississippi Memorial Stadium played host to the old rivals, and the Rebel defense dominated all night.  After a field goal and Russ Shows five-yard touchdown run, the Rebels led 10-0.  Lynn Ross forced an LSU turnover that led to a 41-yard touchdown pass.  The final score was 32-0.

Ole Miss beat Memphis State and Louisiana Tech after that, setting up a season-ending showdown with Mississippi State.  After a 1991 Egg Bowl victory, Jackie Sherrill infamously predicted that State would never lose to Ole Miss again while he was head coach in Starkville.  That prediction proved immediately ill-advised.  Ole Miss won 17-10 and would win three of the next four.