What was Lee Ziemba Doing?

Share All sharing options for: What was Lee Ziemba Doing?

Well, if you're like me--an obsessively observant Ole Miss Rebel fan with a pretty good memory--you knew exactly what Lee and the rest of the Auburn offense was doing with the busted play seen below: 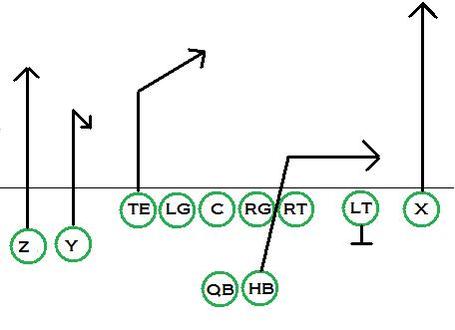 Here's the play which we'll call "Oher for Harris."  Now, to really understand what is going on here, you've got to understand the rules about how a formation must be designed with regards to the line of scrimmage as well as what constitutes an "eligible" receiver.  To keep it as brief as possible, there must be seven men on the line of scrimmage and, of those on the line, only the two on the outer edges of that group may receive a forward pass.

If my MSPaint diagram doesn't demonstrate this well enough, the players labeled "TE," "LG," "C," "RG," "RT," "LT," and "X" are all along the line of scrimmage whereas the other four players are not.

If you're not with me so far, there are other websites out there for you.  If you are, let's run down how this play should ideally work:

Let's look at some grainy screen shots comparing Ole Miss' successful utilization of this play and Auburn's broken version, shall we? 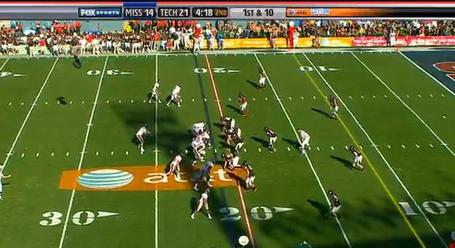 Ole Miss has a first down and ten on the Red Raider 21 yard line.  Tight end Gerald Harris is atop the line at what would be Mike Oher's left tackle position.  Oher is, however, lined up on the line standing upright.  See him standing where the ampersand of the AT&T logo would be?  A shadow is kinda covering him up but that's the guy.  Notice Snead in the shotgun; Andy Hartmann as the HB, H-back, slot thingy; the split end down low; and the two receivers off of the line up top. 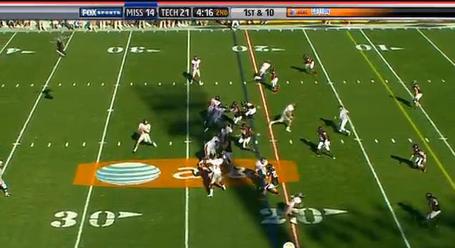 I hope this screen cap isn't too grainy or muddled, but try to look at Oher moving backwards.  He has his hands up in the air as if he's calling for the ball.  The linebackers and safeties all on his side of the field are staring him down (once again, it's a bit hard to tell...  I know) while Snead has his body and head turned as if he is looking to get the ineligible Oher the ball.  Look at Harris though; he is now darting past a linebacker who has no idea he is within a few yards of the guy and will be able to split the two safeties right down the middle.

Interesting note: if you have this play on your DVR or something, watch it in slow-mo.  You'll see Oher watch Harris run downfield.  As Harris breaks into the secondary, Oher literally points downfield, signalling Jevan to look for Harris to make the throw.  It's a pretty badass play. 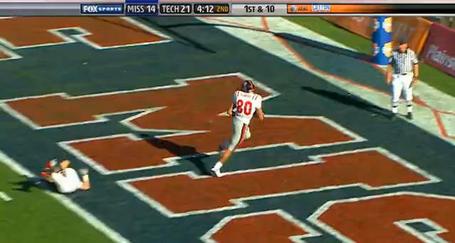 A split second later, Snead glances upfield, sees Harris behind the mike linebacker and between two safeties, slings the ball to him, and it's touchdown Rebels. 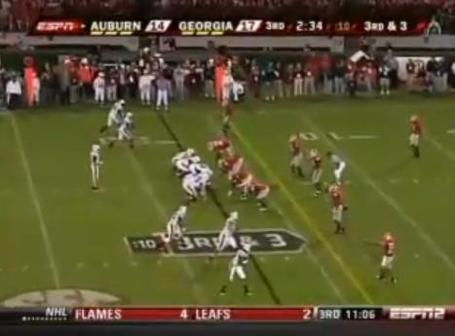 Same sorta deal but even grainier.  Tight end on the line up top, left tackle Lee Ziemba standing upright along the line.  The down and distance situations are different, but that's really about it. 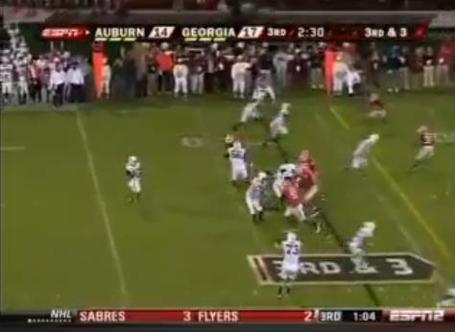 Ziemba drops back for the phantom screen while the tight end darts forward.  However, this time, nobody's staring down Ziemba's screen and a linebacker has the tight end covered.  Furthermore, the Bulldog defensive line is about to own the Auburn offensive line, hard. 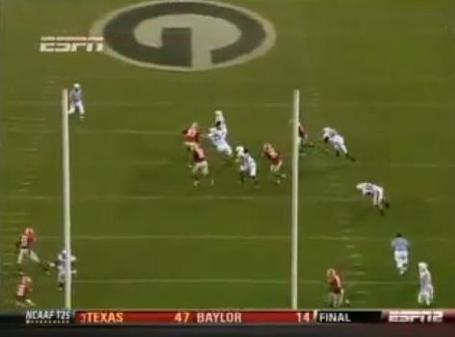 Another look.  The line didn't protect Todd very well at all and the tight end (bottom right) has the same linebacker standing in his stride. 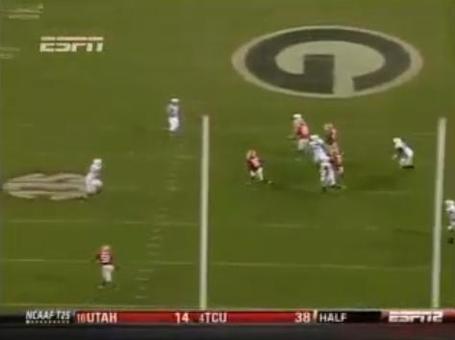 And a look at what was going on just as Chris Todd was about to throw to an ineligible Lee Ziemba reveals that nobody was fooled by Ziemba jumping around like the fat kid on the blacktop playing post ("I want the rock gimme the rock I want it I WANT IT I AM GETTING MOM").  In this situation, Todd shouldn't have thrown it to anyone, let alone Ziemba, but should have instead tried to crumble into a sack.  Georgia's defensive line won the battle in the trenches, their secondary and 'backers played good coverage, and absolutely nobody was fooled by the trickeration.  Well done, Georgia bulldogs.  Instead of a Touchdown for the Auburn Tigers, we saw 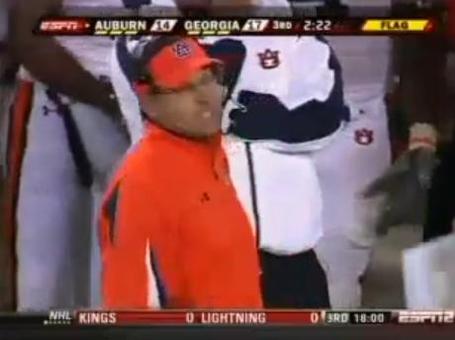 I hope you enjoyed that bit of X's and O's talk.  No, I'm not Chris Brown of Smart Football.  But I am smart(esque).  And I like football.

Now back to your regularly scheduled HATE WEEK.