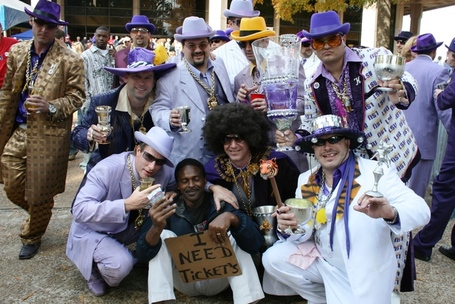 Fuck.  This is going to be a crazy week.  I'll have to sit my ass at work all day for four days.  Waiting, itching, festering until--glory be--I make the trip down to Oxford on Friday.  The Square will be the usual madhouse it is the night before the LSU game and the Grove will be abuzz with the thick, humid atmosphere of a long-standing rivalry.

I'm gonna get the hate started, and I expect this week's HATE WEEK thread to better the Bama week's in intensity.

Here goes: I hate LSU because they get away with shit that Ole Miss couldn't even touch with a 30 foot pole.  Look at those fucking guys up there.  Look at them.  Look at the fake gold teeth, afro wigs, chains, and drankin' cups.  Now imagine if Ole Miss fans had done that.  Imagine a bunch of well-to-do white guys in puffy red and blue suits wearing fake teeth, wigs, and chains.  Call them the "Rebel pimps" and then take pictures of them huddled around a seemingly drunk, obviously black ticket scalper.

Deadspin would be all over that shit in a damn heartbeat.  Believe it.

But, when LSU does it, it's cute.  Fuck that.  Fuck their purple and gold confederate flags (seriously, how in the hell do they get away with this?), fuck Robert E. Lee's fightin' Tigers, and fuck those guys who said that shit on YouTube outside of the Superdome.

So long as the first school amongst LSU, State, Auburn, and Alabama to integrate (something which people totally ignore); the first school to host a presidential debate featuring a minority candidate; and the school which strives more than any other towards racial reconciliation in the Deep South continues to be the conference's racism whipping boy, I'm going to be bitter.  Get over it.

NOTE: For the unitiated, I'm not saying I want Ole Miss to do those things.  It's hard enough to be a Rebel fan as it is; I don't need more confederate flags, guys dressed like pimps, and embarrassing YouTube videos to make this any more difficult for me.  I am glad Ole Miss is moving away from those kinds of things.  Very glad.