Share All sharing options for: THE LOCAL VOICE #93 - Win and Go Bowling 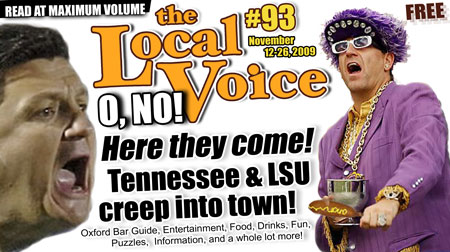 The Rebels had taken the rival-ish Razorbacks to a proverbial woodshed before beating the proverbial pig turds out of them. "Hou-ston-Nutt Hou-ston-Nutt" rang throughout the stands, players were able to boast personal records, and Rebel fans walked back to The Grove to, for the first time in a while, eat their cold chicken tenders and sip their juleps with a satisfied grins on their faces.

On October 31, every last bit of that came crashing down.

The Auburn Tigers, in one quarter alone, scored more points on the Rebels than any opponent had thus far this season. They executed well while the Rebels executed poorly. The Rebels lost in a surprising and shameful fashion on a Halloween that saw all of the fun sucked out of it before it was even dark outside. The players, coaches, and fans were all dejected and have likely been so since, as a poorly put together slap fight against a team from Flagstaff, Arizona, is damn near the opposite of what the doctor would order for an ailing football squad.

This weekend, two teams that contrast sharply in the aura that currently surrounds their program will square off in our fair Oxford. On the one hand, you have the listless Rebels who, after seeing whatever hype the media thrust upon them come crashing down in a few short weeks, are looking down the barrel of a schedule which could realistically deny them bowl eligibility-assuming things don’t drastically change. On the other hand, you’ve got the Tennessee Volunteers who, despite having lost to Auburn, their rival Gators and Tide as well as a bad UCLA team, have ridden the highs of beating a once-upstart South Carolina team and stomping the nonsense out of the Georgia Bulldogs to a program euphoria not seen in Knoxville in far too long.

Really though, these teams are more evenly matched than casual observers may realize. Both have a talented yet horribly inconsistent quarterback. Both have young offensive and special teams playmakers coupled with a few hard-working veterans. Both have strong defenses that yield very little space for the opposition. And both have coaches who are known more for their personalities than their actual coaching abilities.

And truly, both teams really need this game.

If Tennessee wins this game, convincingly or not, they’ve got a more-orless downhill slate with upcoming games at Vanderbilt and Kentucky. They finish 3-0 and they’ll finish with 8 wins. That could put them—I never thought I’d write this a month ago—at 2nd in the East if things fall their way. That would likely mean an Outback Bowl bid for the first year head coach Lane Kiffin and his Volunteers.

If the Rebels win this game, especially in a convincing fashion, the confidence could carry the Rebels to a victory over the hated LSU Tigers. In the unlikely event of both of those victories going the way of the Rebels, there is hardly a snowball’s chance for Tyson Lee’s midget brigade to defeat a then-amplified Ole Miss team. A return trip to Dallas, while not Atlanta or New Orleans, should be more than enough to satiate a Rebel fan base hungry for something of which to be proud. Such wins won’t be easy, and they won’t come cheap for this band of Rebels, but it is certainly well within the realm of possibility.

So yeah, I guess I’m saying that the winner of this game has a great shot of winning out and making a New Year’s Day bowl.

I hope someone doesn’t show this newspaper to Bradley Sowell; I would hate for the pressure of the implications and possibilities that could result from this Saturday’s match up to be too much for him.

Hotty Toddy, Rebel fans. Let’s beat Tennessee for the first time ever in Oxford (disclosure: we’ve only played them in Oxford four times) and send Ed Orgeron home with a newfound appreciation of just how good some of the guys he recruited actually are at football.