THIS JUST IN! (HATE HATE HATE)

Share All sharing options for: THIS JUST IN! (HATE HATE HATE)

As mentioned in the Rebel Roundup

Carrying on the longstanding Volunteer tradition set forth by gentlemen such as Albert Haynesworth and Jamal Lewis, freshmen Michael Edwards, Nu'Keese Richardson, and Janzen Jackson were arrested last night for good citizenship, a respect for their fellow man, and holding someone up at (pellet)gunpoint in the parking lot of a Pilot convenience store.

Whether or not the money was being stolen with the intent to buy more guns, drugs, or a rape machine is not yet known, but my sources at the Ole Miss Rivals board and the "SAVE DIXIE" Facebook group have told me that "oh yeah they definitely wanted all of the above" and "just look at 'em."

Just a few minutes after the posting of the Rebel Roundup in which I, your humble bloggeur correspondent, broke the news to the online Rebel nation, an unnamed witness to the crime sent me a very real photograph of the incident.  Disturbing photographic evidence, after the jump. 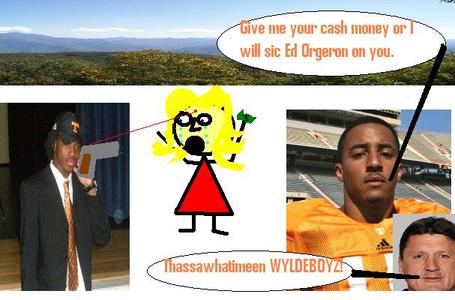 Praise be to he/her who came up with the idea of "the jump."  These kinds of posts wouldn't at all work without it.  Hardee har har HATE HATE HATE yadda yadda.