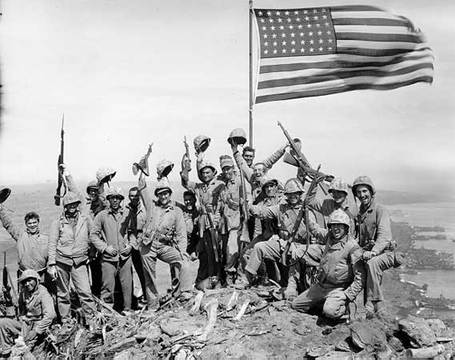 Remember our Vets
In that picture, I see my generation's Gradfathers; men who spent years away from their homes in a living hell just so their grandchildren could, one day, argue over the internet about what should and shouldn't be screamed at university football games. Snark aside, the United States and the Western World as we know it today would hardly exist without the actions taken by our servicemen and -women over the last several centuries.  The title of today's post also alludes to the European counterpart of our Veterans Day: Armistice Day, a day celebrated to mark the end of the First World War.  To the two or three European Cup fans out there, happy Armistice Day.

Soccer To Face Washington In NCAA First Round | OleMissSports.com
Why Role Player, our usual emissary to communist sporting events, didn't mention this I don't know, but the No. 25 Ole Miss women's soccer team was announced as a part of the field of 64 for the NCAA Championships. The Rebels are be headed to Portland, Oregon where they will face the Washington Huskies in the first round this Friday.

Tennessee preparing for Ole Miss' Mr. Everything | VolQuest
Lane Kiffin and his Volunteers are starting to learn that Dexter McCluster isn't exactly something which is easy to prepare for. He's got the shiftiness of an elite NFL back and the route running skills of a solid slot receiver. He's tiny which, oftentimes, benefits him with his escapability. But, if I were Kiffykins I wouldn't worry too much; we tend not to use him when we should because our coaches still trust Jevan Snead to score points 'n' shit.

Dungy shares wisdom with Rebels | Victoria Advocate
Tony Dungy, the Super Bowl winning once-coach of the Indianapolis Colts, recently traveled to Oxford to meet and exchange words of football wisdom with our Rebel football team. He did this at the request of Houston Nutt himself. Do you think Dungy would have done that for Mullen, Petrino, or Miles? Hell no he wouldn't have, because those guys are turds ha lol.