Before we get started here, I would like to remind everyone of the Red Cup Rebellion disclaimer which is visible any time you are on the main page by scrolling to the bottom-left:

This website is strictly for entertainment purposes only.  As such, any and all measures which may be deemed entertaining by the site's authors will be utilized.  These measures include, but are not limited to: cursing, sexual innuendo, derision, and simply making stuff up because we find it hilarious.  If you find any of the aforementioned to be offensive, we discourage your participation in this site.  There are many, many websites which cover Ole Miss Rebel athletics in a much more family-friendly and serious manner.  Please visit and enjoy them.  And, while you're at it, spare us the lecture.  People do find this kind of stuff to be entertaining.  Let them have their fun.

Normally, it is 100% unlike us to warn people of anything, but this one could get wildy offensive or vulgar.  If such things aren't your cup of tea then simply don't click the jump.  You do not have the right to bitch at us this time.  And please, do not send us emails demanding some sort of "civility" as you perceive it.  I'm serious. 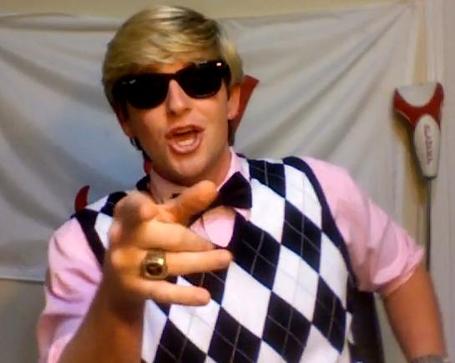 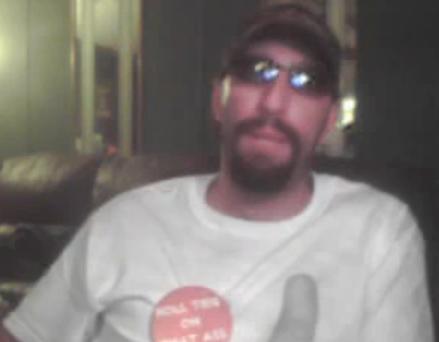 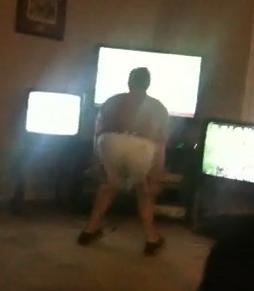 SCENE: JTBowtie's basement in Hattiesburg, MS. A damp weight holds the air, which bears scents remnant of seawater, still throughout the room.  A large Alabama script "A" flag hangs off of the far wall, while photographs of various Alabama football players and framed pieces of houndstooth cloth adorn the remaning walls.  A few tables and chairs are scattered about, with a set of chairs pushed up against a table bearing a laptop computer.  JTBOWTIE is sitting at said table.  RICKY is standing in a corner, fuming.  COWBOYINTN1979 enters the room and is quite visibly dumbfounded.

JTBOWTIE: [with wild hand gestures] Oh snap!  Hey y'all, welcome to my basement, also known as "the snake pit," but only on certain nights of the week!  Anyway, I've invited all of you here with me to form the Alabama/YouTube brain trust!  Our goal: to talk shit about Ole Miss because, although we've convinced ourselves that they don't matter to us, we cannot seem to avoid doing things like making self-serving YouTube videos centered on the Rebels!  So what about 'em?

RICKY: OLE MISS IS NOTHIN' BUT A BUNCH OF GODDAMN HORSESHIT!

JT: Well yeah naturally [winks, tightens bowtie], they are just a bunch of white trash losers who walk around in bowties, sporting their Bama bangs, and pretending like they have a lot of cash.  What a bunch of lame-asses right?

JT: Baby it's drippin' with irony just like the Alabama football team is gonna be dripping [hand gesture] with glistening beads of sweat all over [hand gesture] their bodies come Saturday. [uneasy pause]  So yeah, speaking of the Crimson Tide, let's talk about some of the players we've got.

JT: Oh yeah, I love Julio.  I like ‘em tall with long arms that you can just get lost in when you're looking for a place to hide.  You know, a place away from the world where it's just you and it's just him and...  wait, what...  Javier Arenas!  Best punt returner in the nation!

JT: But, as sad as it is for our Tide, Dont'a Hightower is out with a knee injury.  Hey, it ain't gonna matter, because Ole Miss is lame and full of doo-doo heads, but what are your thoughts on this.

COWBOY: Got dayumm man, seriously, you had to do that?  Why do you gotta make us AlaBAMMAH fans look so bad?  I mean, fuck, look at me.  I'm the biggest damned redneck on the whole dadgummed internets and I don't even say that shit.  That's racist man, that's just racist [chugs beer, cusses Auburn].

JT: No, Ricky, it doesn't work that way.  You can't say "poor little [seriously there are just some words we won't say]" and not be a racist.

JT: Okay Ricky, alright, chill, calm down.  Well, hmph, we all know the Tide is gonna roll all over Ole Miss, [grins, swoops hair, still doesn't understand that he looks like a fucking idiot in front of the entire fucking planet] but hey, they've got a few guys and yeah they may hang in there for a while.

[RICKY throws visor, kicks over a lamp, sets a curtain on fire]

COWBOY: Hey man, what the fuck?  Don't lose your shit.

COWBOY: Shit now look at you, you done shitted up a guy's carpet.  That's sick right there [opens beer, lights cigarette, flips something off].  This little-pecker havin' dude with the sweater-vest is gonna have to clean greasy shit stains out of his rug, man.

JT: [under his breath] Hmmmmm, wouldn't be the first time.

RICKY: I OUTTA DRIVE DOWN TO WJOX AND BLOW YOUR GODDAMN BRAINS OUT!

JT: I outta blow something out.

COWBOY: [perplexed] Look man, I'm cool with whatever, just don't go around pullin' your ding-a-ling out at Paul Feinburn over there just because, ok.  You know that summanabitch called me a "loser" and I'm pretty sure he fucked Tommy Tuberville in the ass you know?  It's all over YouTube.

JT: Look [hand gestures, hair swoop] Let's just say I know a thing or two about ol' Paul and lemme tell ya, the carpet matches the drapes baby.  Smooth and sour, just like grapes, ya dig.

COWBOY: That's di-damned-sgusting, you know that right there?  ROW TAHD ON DAT ASS!

COWBOY: Seriously, cut that "in-your-window" shit out.  Are you just fuckin' around or something?  Why is it that, out of the three of us here, I'm the one doing the least to damage AlaBAMAH's reputation?

RICKY: I BET YOUR MOTHER'S A WHORE [throws chair at bystanding toddler, kills it, feels no remorse]

AUBURN FAN: Haha yeah!  War Eagle motherfuckers!  Yeah I've followed you bitches here and I know what you're up to!  I've got it all figured out!  Just gettin' money together to just keep pumpin' cash into the Crimson Turd's bankroll I say!  Hah!  And that fishing trip where you spoonfed Julio Jone$ $teroids and Ca$h (you see the dollar signs you greedy jerks?) is totally going to get you on serious probation from the NCAA.  I have sources 'n' shit.  WAR DAMN EAGLE!  Oh, and something else: I'm pretty sure that inner-city drug addiction the poverty which still exists in much of the third world originated in Tuscaloosa.  And AIDS.  It only makes sense.

JT: Ugh, you're not beautiful.  Leave.

[REBMIK enters room, says five syllables; the universe collapses in on itself in a gigantic black hole of stupid; Cowboy survives and recaps the events via YouTube; Ole Miss wins against Bama; Alabama fans still unable to comprehend why the rest of the college football universe thinks they're insane]

ED:So yeah, maybe it wasn't so bad.  Or maybe it was highly offensive.  I don't care either way, so long as somebody somewhere was entertained.  Does that make me a whore?  You're damn right it does.