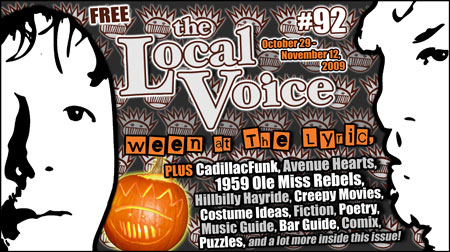 And this undoubtedly spooky edition of Red Cup Rebellion via The Local Voice will be fairly similar to the piece we brought you last Halloween.

What's that you say?  You don't remember last year's issue?  Well to refresh your apparently poor memory, we prepared you faithful readers for the then-upcoming Auburn game and Halloween weekend with a list of inexpensive and simple Rebel-related costume ideas.  This year, it's more of the same!  We've got Auburn on the schedule the afternoon of Halloween so if you're either making the trip to the Plains of Alabama or hanging around your favorite Oxford haunt, the costume suggestions below are likely to impress your friends/have people mock you openly and without remorse.

The Ole Miss offense: Don't show up for the first half of the party.

The Auburn football team: Hit on every girl. Do every shot. Dance like a maniac. Do all of these things until 11PM. Then mention that you have to drive home, have some alone time with your girlfriend, and wake up early for work.

Any sort of connective tissue located in the knee of an Ole Miss basketball player: explode at very poorly timed intervals.

Omaha, Nebraska: Just hide for the whole night after convincing your friends (who, ideally, should be Ole Miss Baseball fans) that you're gonna party way hard with them.  Soon enough it'll be "hey, where's so-and-so?" "Hell if I know. I doubt I'll ever find him."

Jevan Snead: Suck. Shave the sides of your head at a party. Then, be a badass.

Bradley Sowell: Dammit, this would've been funny 3 weeks ago.

Terrance Cody: Remember our Jerrell Powe costume from last year? It involved you using stilts and bags of sand? Yeah well add a few more bags of sand and some mangy dreadlocks.

Tommy Tuberville: Sport a Hawaiian shirt, flip flops, bermuda shorts, and a gigantic grin on your face. When folks ask you who you are and what you're doing, say "not wasting my time in Opelika County Alabama, that's for damn sure."

Lane Kiffin: Acquire a bunch of nice things, a fantastic job, and an incredibly attractive significant other without actually having done a damn thing to deserve any of it aside from being your father's child.  Then, approach people who do deserve the nice things and accolades they've received and somehow tell them that you're better than them and whatever it is that they do.

Brent Schaeffer: Tell everyone that you have a really awesome costume that they're all going to love. Show up dressed in normal clothing.  Run in circles and throw stuff and your friends' feet.

An Ole Miss fan: Act like an asshole. When asked to calm down, accuse people of stealing your precious traditions and somehow violating your constitutional rights.  Then, act like an even bigger asshole to spite them.

An Arkansas fan: Approach two people that are obviously hitting it off. "Warn" one person about what the other will do in three years until they leave or hit your face.  Remember, poor grammar and loud noises are key.

Another Arkansas fan: Hang out with someone who may not be the hottest person there, but aren't half bad in their own right.  Once this person loves on you a little bit, scream at them for not getting engaged and buying you a car.  Then, head over to someone who has too much plastic surgery to be recognized, repeatedly slaps your face, and sure as hell ain't going home with you.  Convince yourself that what you've gotten yourself into is somehow better than what you had.

Mississippi State fan: Keep talking about how next Halloween, your costume is going to be so much better.

Trust us.  You'll be the life of the party with these.  And don't forget to actually be a good fan and watch our Rebels beat the nonsense out of the Auburn Tigers for the second year in a row.  Happy Halloween and Hotty Toddy!