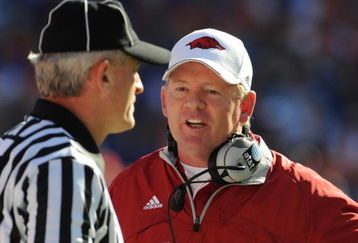 Bobby Petrino thinks this is bullshit.

You've all heard the moans and groans throughout the country on this, so I won't recount in detail what I hope to generate discussion on.  If you need me to elaborate on the final few controversial minutes of the Arkansas/Florida game this past Saturday, then you're a bad SEC fan.  If you'd like your memory refreshed, I'll direct you to some other folks who have covered the events pretty well on their own sites.  I just wanted to get the discussion started over here being as how we do, you know, play Arkansas and all this Saturday.

Woooooooooooooooooooooooooooooo PIG SOOIE!  There, Hogs called.  Please tell us what you saw and thought/think.  There was the (totally bogus) call on Malcolm Sheppard for knocking a Gator o-lineman on his ass--Heaven forbid a defensive tackle ever do something as heinous as hit a guy who was clearly looking to hit him first--and then there were the pass interference calls and no-calls.  The latter are a bit more iffy and difficult for me and my untrained eye to elaborate upon, so perhaps Juco or WW could chime in.  Re-observe and consider them.

So, how much of an impact did the referees have on the final outcome of the game?  Would Florida have won regardless (Sturgis still makes a field goal, albeit longer or Florida wins in OT) or did Arkansas get hosed out of a legitimate chance of pulling an Ole Miss of 2008 style upset?

The answer, as I see it, lies somewhere inbetween, but what say you?