A break from your regularly scheduled programming: Baseball!

Share All sharing options for: A break from your regularly scheduled programming: Baseball! 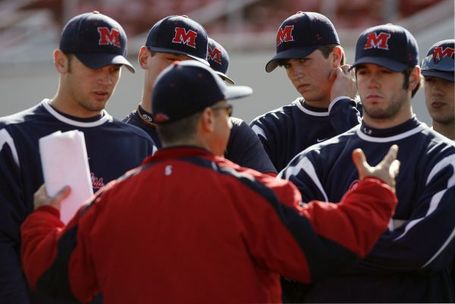 The Rebels have announced the 2010 baseball schedule.  It has 34 home games and SEC home series against Florida, LSU, Tennessee, Arkansas, and Auburn.  What are our chances?  You'll find my thoughts after the jump...

Bianco had this to say about the schedule:

We try to schedule a good mix of teams that will be exciting for our fans," Bianco continued. "We also want a schedule that will prepare us for conference play and another post-season appearance as we work towards our ultimate goal of continuing to bring championships to Ole Miss and advance to the College World Series."

The 2009 season was a good one for the Rebels as we were SEC Co-Champs with LSU.  They went on to win the College World Series, and we were sitting at home.  Sadly, I'm not sure that our fortunes will change this year.

From the 2009 squad, we lost almost all of our pitching.  Nathan Baker, Brett Bukvich (he's now receiving social security), The Bittler, and surprisingly steady Philip Irwin.  Not to mention the loss of Jake Morgan to Tommy John Surgery.  Uh oh.  To be competitive in 2010, we need Pom Pom to be dominant, Barbeck and Goforth to develop, and McKean to be solid.  Also, some of the new guys need to impress.

Offensively, we might be ok.  Sure, we lost Jordan Henry and Logan Power, but I think that Tim Ferguson, Zach Miller, Matt Smith, and Matt Snyder should keep our numbers up.  Taylor Hightower looked good at the plate in limited action last season.  What's missing from a team that batted .310 last year?  Power.  No, I'm not talking about Logan either. I'm talking about that Matt Smith from his freshman campaign power.  We need to find some of that somewhere.

Here's how I see next season's lineup minus the newcomers:

2B Tim Ferguson (despite rumors of moving him to outfield)

OF David Philips (against my will)

As you can see, we have some experience returning, and we should be able to replace Hashman and Philips with some newcomers. However, I feel comfortable with the rest of the group.

I will have a more detailed analysis as the season approaches.  How do I like our chances in the SEC?

Well, I doubt this team dominates from beginning to end like last year's squad (rough start, but still looked good).  The way I see it, we will have to grow as a team.  Remember the 2006 squad?  It started 13-11 and had two freshman weekend starters.  No proven pitcher returned from the 2005 squad.  Over the year the hitting and pitching developed.

This coming season, we'll need the same sort of miracles to happen.  We have one proven pitcher.  Every regular season has 56 games, and I see us with a 34-22 (13-17 SEC) record.  That's ok though because this is our first rebuilding year in quite some time.

What are your thoughts and predictions?