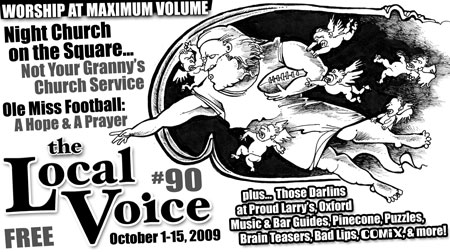 We see it damn near every season: Ole Miss loses to a team which it "shouldn't," causing every other member of the Ole Miss faithful to become Chicken Little.  For those of you which this moniker may describe, follow along.

Take a deep breath.  Exhale.  The sky is not falling, and we can prove it this weekend against the Commodores of Vanderbilt.

Ugh...Vanderbilt.  As the SEC's token academic school-every legitimate conference has one, you know-Vanderbilt should not have very good fooball.  And, for all intents and purposes, they don't.  What they do have, however, are a few qualities which, unlike their poor gridiron endeavors, are qualities which are extremely inappropriate for a stereotyped group of nerds: scrappiness and luck.

Last season's Commodores squad embodied this unlike any team I have ever seen play perhaps any sport, ever.  2008's Vandy team was not good.  They had a very limp offense which was completely devoid of legitimate, SEC-caliber playmakers and a defense which could hardly be described as anything better than "middle-of-the-pack" in conference.  Yet Vanderbilt actually won SEC games.  Four of them.  They went to a bowl, and then won that.  They beat Kentucky, South Carolina, Auburn and, you guessed it, the Ole Miss Rebels.

"Well then, how'd they do it," a new or quite casual SEC fan may inquire.

They got lucky and, yes, it is really that simple.  Even Commodore fans will admit that Vandy's season last year could have been anywhere form 3-9 to 9-3.  Costly interceptions, improbable plays, and "the bounce of the ball" were significant factors in damn near every game on their schedule.  Every team not named Florida which the Commodores faced had a tough time fighting for a win.

Unfortunately, as anyone who has followed the Rebels for any significant amount of time can tell you, having a tough time defeating Vanderbilt has been a hallmark of Ole Miss football for a very, very long while.  Seemingly everyone else in the Southeastern Conference has had their fun ripping Vandy to shreds in a gimme conference win, treating it like stats-sheet padding scrimmage.  Yet, we Rebels have rarely had such fun.  We have lived and died by big plays and fourth quarter heroics in what seems like a majority of every game many of us have seen our Rebels play against Vanderbilt.

The 2008 matchup in Oxford is, by an incredibly wide margin, the most painful and exemplary occurrence of this phenomenon.

One year removed from a winless conference season, the SEC opener against Vanderbilt seemed as good a time as any for the Rebels to restore the program.  A 40-point game against Memphis a week before a narrow loss to a then-ranked Wake Forest team showed that the Rebels could score points.  Furthermore, Vanderbilt had not convincingly defeated any team of real substance.  Things looked good for Houston Nutt and company.  But, as time expired that night in Oxford, a dejected and demoralized Ole Miss Rebel program had yet another conference loss.

Statistically speaking, the Rebels dominated damn near every single element of the game.  Ole Miss had 183 more yards of offense, significantly more yardage per every play, good special teams and an overwhelming defense.  But, six turnovers later, the Rebels lost; by six.

Only we Ole Miss Rebels can lose by a margin which serves as a reminder of just exactly how we lost.

If any one of those turnovers does not occur, the Rebels are the likely winners.  The Commodores did not defeat the Ole Miss Rebels on that day; the Ole Miss Rebels defeated themselves.  It hurt.  The players and coaches wondered if they could ever figure out a way to win a game with something at stake.  Fans-your faithful bloggeurs included-questioned their loyalties and emotional masochism.  The nation, continued to doubt Ole Miss.  I cannot think of a single more agonizing moment to have ever been associated with Ole Miss football than the week after that game.

Guess what, Vandy: payback is an ice cold bitch.

I know, as far as any bloggeur can know, just how much our first SEC game will mean to this particular band of Rebels.  They know they were the better team last season.  They know that they only defeated themselves.  They know now how to win and how to do it in an incredibly convincing fashion.  Now it is just a matter of getting down to business and doing it.

Jevan Snead knows his Vandy picks, all four of them, kept Rebel offenders out of the endzone.  Dexter McCluster realizes that his fumbles came at the worst possible moments.  The receivers realize they need to make plays on every down and the defense knows exactly how to stifle the Vanderbilt "offense."