Will Bogan Hatches from Starchy Cocoon

Share All sharing options for: Will Bogan Hatches from Starchy Cocoon 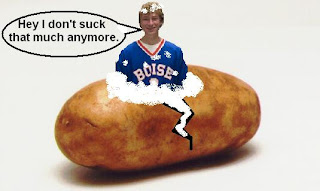 Get it? He's from Idaho.
Will Bogan, the Gem State* native and subject of much ridicule, grew a sack last night and played some damn ball. Bogan scored 16 points and tallied 7 assists in the overtime road victory against the Arkansas Razorbacks.

Yes, I know, the Razorbacks aren't necessarily "good" at basketball and their "defense" doesn't so much stop the other team from scoring but Bogan wasn't his usual, sheepish self. He needed a game like this to get adjusted to NCAA-level speed and find his comfort zone on the court.

This could either be a flash-in-the-pan type of moment or an indicator of things to come but let's all hope it's the latter. Bogan may end up being pretty solid afterall. Of course, he's no Terrico White but, shit, who is? That kid is too damn good. How Calipari and Pearl let a Memphis product like that elude their grasp confounds me.

Next season, if Bogan, Warren, and T. White can attack the lane, get the ball to the open shots, and/or excel as outside shooters, our backcourt will be one of the conference's best.

Here's to you, Will Bogan. Welcome to big boy basketball.


*You thought it was "The Potato State," didn't you? Bigot.