Well, it's Mississippi day at the SEC tournament again. The Rebels play the Wildcats, and the Bulldogs play ... the Bulldogs.

Ole Miss won the regular season game against Kentucky, due primarily to holding Jodie Meeks to 2-13 shooting until the game was out of reach. We were unable to keep Patrick Patterson in check, and he made us pay going 8-12 from the field and 8-9 from the charity stripe. The Rebels will have to contain Patterson in order to win today, but I think that's possible.

Malcolm White has emerged as a legitimate player since that game. Against Kentucky, Malcolm was also 8-12. While no one would argue that Malcolm is the player that First-team All-SEC selection Patrick Patterson is, he has been a good presence of late, playing great defense and putting the ball in the hole (though inconsistently). Malcolm scored 20 points against a Mississippi State team that boasts the best interior defender in the country. I think that Malcolm will provide the post presence needed to match up against Patterson in the zone. Of course, they don't really play the same position since Patterson is more of a 4. So a power forward will have to step up as a defender against Patterson. That's why I'm hoping Kennedy puts Murphy on Patterson.

While Patterson has three inches on Holloway, we don't have a player on our team that plays the game harder than Murphy. He will fight for every ball and come down with a load of rebounds regardless of who he's paired against. I can't comprehend why he isn't starting games right now. He leads our team in double doubles and is a force coming off the bench. He's our second best interior defender, and he's a good offensive threat as well (leading our team in field goal percentage by ten percent). I want Murphy Holloway on the court for 30 minutes a game. Not 22.

In the end, I think that Kentucky is a pretty good matchup for us. They have no depth whatsoever and only have two players who are serious scoring threats. If we can contain either of those, we've got a good shot of winning. If Zach Graham can hold Meeks to 2-13 shooting again, it's in the bag. That's a big if though. 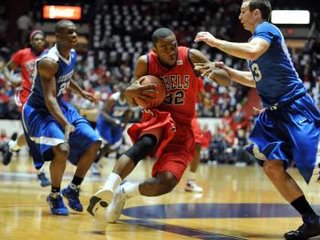 Anyone else think this guy got juked out of his shoes?