First of all, I would like to thank everyone who participated in the live blog with us. It went over really well and it was a lot of fun. We'll have to do it again sometime.

Second of all, we've somehow got a 4-4 SEC record in basketball. We beat somebody by 19 earlier tonight. I don't know if I'll ever figure Rebel basketball out.

Finally, here are the offensive linemen we signed today. I am listing them in the order of "least impressive to me" to "holy fuck it's Bobbie Massie and he's out to get me."

5. Evan Swindall - Center - La Fayette HS - La Fayette, Georgia
Swindall seems to have been signed for two reasons: added depth and his experience as a center. If you'll recall, this season's center, Daverin Geralds, was recruited as a defensive tackle. I feel that this staff felt it necessary to bring in someone with the goal of them being added to our center depth as opposed to simply converting someone in the future. This isn't to knock Geralds, as I feel he performed admirably this season, but you've gotta have true centers on the roster.

4. Logan Clair - Offensive Tackle - NE OK A&M JC - Miami, OK
Logan Clair is definitely a guy the expect to contribute right away. Rarely would a team deep in any position, let alone on the offensive line, bring in a JUCO player so seeing this leads me to assume that Clair will see limited time on the field next year. Clair has good size and his JUCO experience should have him ready to play marginally significant role on the line, even if it's only for two years.

3. Michael Brown - Offensive Guard - Lexington HS - Lexington, TX
Michael Brown most certainly has the size on paper, but his photographs suggest that he's somewhat soft. His photos remind me of seeing Bradley Sowell fresh out of high school. If he slims down somewhat and replaces his baby fat with muscle, he could be a very good guard for us. Get to work, Michael. Also, he's got a kinda bizarre, 1930's henchman look to him in some of his pictures which is an added bonus. 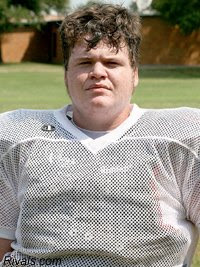 Do you see it?


2. Emmanuel McCray - Offensive Tackle - Forest Hill HS - Jackson, MS
McCray's greatest quality is that he, like Brown, is coming straight out of high school with offers from the three biggest programs in the Magnolia State. He hasn't exhausted any of his eligibility with Jr. Colleges so he'll have plenty of time to grow under Don Decker and Mike Markuson. If McCray grows a bit larger and ups his mass and strength, he could become a solid lineman for the Rebs. 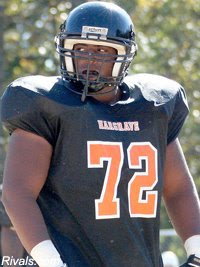 If you need an explanation as to why Mr. Massie is the greatest offensive lineman Ole Miss has recruited since Michael Oher (if not before then) then you should reconsider your fandom. Bobbie Massie is gigantic, strong, and out to prove a point.

What point, you ask?

That you're a little bitch, that's what. He won't fail in proving this, either.

He's also not afraid to hurt your feelings or torture you cat-and-mouse style. He enjoys the misery of his victims. Today's "I'm committing to Alabama... NOT!" hat episode was proof enough of this.

Of course, he wouldn't have any desire to come play for Hooten Dale and the Murray State Mafia down here in OxFART so we Ole Pi$$ Webbuhs had to pull off something shady to get him here, right?!? Eat my ass, State, Bama, and Arkansas. Have fun getting your shit pancaked over the next few years. You're going to need to prepare for this ent/hydra early and often. I'd suggest you invest in some of these: