Baseball Season Begins - I'm getting all warm inside just thinking about it. I've got "The Summer of '69" stuck in my head, the imaginary scent of overcooked hotdogs wafting into my nostrils, and visions of homerun balls dinging unobservant women in the head. It's going to be tough being so far from Swayze for the first time ever, but hopefully the Cup will give me a legitimate way to vicariously enjoy this team's success. As has been blogged, our baseball correspondents, One Man to Beat and Brian Walker's Elbow, will be heading down to Mobile to indulge in fresh oysters, Mardi Gras, and the Coca Cola Classic. Hopefully their coverage of this weekend will give you an idea of the baseball coverage you can expect from the Cup this season. Oh, and if anybody is curious as to what our ad revenue goes towards, it's tickets to these kinds of things. Thanks e-Rebels and Fayetteville public library patrons!

Speaking of Baseball - Baseball America has a kickass piece on the facility upgrades going on all accross the NCAA baseball world. It's definitely worth your time. The slideshows and quotes from the coaches make it pretty evident that college baseball is slowly but surely becoming more and more important to the various university athletic programs. Our upgrades are pretty damned impressive as are Michigan's, Texas', LSU's, and South Carolina's.

"Celebrating" 100 Years of Rebel Basketball - This Saturday against the Georgia Bulldogs, the Rebels will be celebrating the centennial of our *ahem* storied basketball program. If you're in or near Oxford, be there. You're not too good to watch Basketball, especially when the closest thing to a guaranteed win in the SEC rolls into town.

"One Heartbeat" DVD on Sale Now - Only Ole Miss would make a highlight DVD of a 9-4 season. Ok, now that I've got that snarky stuff out of the way, it would be nice to own a single DVD with the Florida game, LSU game, Egg Bowl, and Cotton Bowl on it so this DVD isn't that bad of a deal.

Reader Submissions are all in Good Humor - Hunter sent this one in: 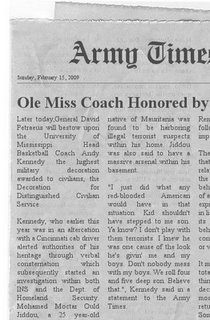 If you've got issues with this, I understand, but allow me to quote a line from the award-winning Broadway show "Avenue Q:"

Ethnic jokes might be uncouth,
But you laugh because
They're based on truth.
Don't take them as
Personal attacks.
Everyone enjoys them -
So relax!


If a puppet from the Lower East Side gets it, then why can't you, huh? Thanks again to the ever diligent Hunter for his reader submission.