Our piece for this edition of TLV is about how obsessive a few of us get over recruiting. Take it with a grain of salt, like always and don't forget to comment, criticize, or politicize below.

Click the image for the full PDF of the special Oxford Film Festival edition of TLV. After reading it I've realized that living a day's drive away from the Film Festival is making my soul cry. 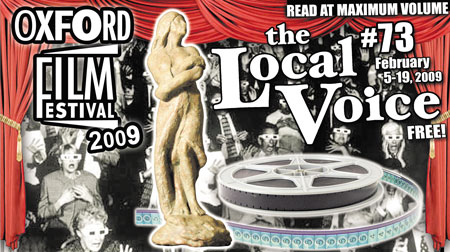 Hi y'all! This is Samantha Marie here! I want to first start off by saying "Hotty Toddy y'all!" Wow, I LOVE Dallas and to get to go there last month was great! I got to visit the Galleria and all of my friends from Highland Park which was super. Oh and the Rebs won! Hotty Toddy whooooooooo!

But, y'all, the time spent since the Cotton Bowl win has gotten me worried. Yeah we're excited fans and we should love Coach Nutt and the players more than ever now! But, in the last few weeks, my boyfriend, Kyle, and my Dad, Stanley, have just gotten really weird lately. I mean, they've always been real Rebels and loved Ole Miss but... but...

Ok, keep this a secret, y'all. The honor of [cuddly sorority mascot redacted] depends on it.
I think my boyfriend and dad have become gay for Ole Miss football. Now, y'all, don't worry. They are good, God-fearing men but, well, they just have really gotten into these football players. Like, really gotten into them. What's even worse is that they've taken it a step further and gotten all gross over boys in high school.

Just the other day, I was playing around on Kyle's computer when I noticed that he was still logged into Facebook. After looking through his profile and typing that I am one of his "interests" (hehe) I went into his message box to see that he had been sending these black kids in high school and Jr. College suggestive messages behind my back!

"I really, really want you to come to Ole Miss," he told a boy named "Raymond."

"Craig" got one saying that Kyle thinks his "videos on the websites are awesome!"

What websites?! He's even added a few dozen of them as friends and promised to meet up with them in the Grove or at the Library! WE used to meet up in the Grove or at the Library back when we were first dating! What is Kyle up to?! I've caught him staring at and buying drinks for dudes at the bar! Some of my friends have even seen him parking his car outside football practices and just watching them with a smile on his faces.

The other day, he even noticed that one of these little boy's "stars" or "rating" or something had changed and was all excited about it but he didn't even notice that I added marigold highlights to my hair! :(

If that isn't enough, I'll catch him talking to my dad about these boys and, somehow, my dad knows what he's talking about! My daddy's getting all weird too! He would tell Kyle about how he would "watch" these boys at their high school and really admired their "thick bodies" and "long legs."

He even promised Kyle he would do whatever it took to get some of these boys to come to Ole Miss. "You're really going to enjoy some of these upcoming freshmen," he told him. Guh-ross!
OH, and do you wanna know the worst part??! No one can give me any guidance! I tried to talk to my preacher about this one and visited his office. After knocking on the door like, I dunno, a bazillion times I just walked in and saw him staring at his computer screen with his mouth all, like, wide open and whatever. He didn't even see me and, THEN when I walked up to his desk, I saw a website with all of these photographs of sweaty boys scowling at the camera and videos of them running around and grappling each others bodies! This is not what Jesus would do. It was horrible, y'all! I ran out of there screaming and then I just cried.

I mean, I can see people getting this excited over the Grove, cowboy boots, a new dress from Marimekko, frozen yogurt machines, candlelights, or Spring Formal (!!!!!) but not over this football recruiting. Maybe since I'm all burnt out after memorizing about all of these girls--their pictures, their hometowns, their interests, their hair color, their sense of fashion, their promiscuity--during rush that I can't see why boys want to do it too.

I thought they were supposed to get excited over, I dunno, bowl victories and stuff. The Local Voice readers, please help me and all of the other girls whose boyfriends and daddies have been taken over by their sinful, icky obsession with football recruits. Please!