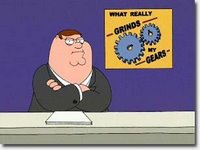 And now, a session that I'm blatantly ripping from Family Guy entitling "Grinds my Gears."

You know what really grinds my gears? The belief that Houston Nutt is incapable of coaching a team that passes.

This belief is usually held by Arkansas fans. These fans said that while Nutt was at Arkansas, he didn't lead a high-powered passing offense. They're right. Matt Jones was not a passer. Neither were Casey Dick or even... MITCH MUSTAIN. Yes that's right. Even Mitch Mustain couldn't pass very well during his freshman year. He completed only 52% of his passes with a whopping 6.8 yards per attempt. TD:INT Ratio? 10:9.

But here's where it gets really interesting. In Houston Nutt's first season at Ole Miss, the Rebels threw the ball only 100 times fewer than the 2008, Petrino-led Razorback squad. That's roughly eight more pass attempts a game by Razorback quarterbacks. Did I mention that we played several games in which Jevan only threw four or five times in the second half because we were up by a million? Arkansas, on the other hand, was obliterated (and thus needed to pass) against Alabama, Texas, Florida and South Carolina, needed come back efforts to overcome Louisiana Monroe, LSU, Western Illinois (who they threw 41 times against), and had to fight back (by passing) to keep it reasonable against Ole Miss and Mississippi State. The Rebels on the other hand, often up by a good bit at half time, rarely threw more than ten passes in the second half. Sure, it may not be flashy, but look at the results.

I guess that Arkansas fans will always have an offense that has a lot of pass attempts if they're always behind. Maybe that's what they want. It certainly makes the numbers look better at the end of the year. "Hey! We passed for 4,300 yards since we were down 30 at every halftime! Awesome!" Well I'll take winning the cotton bowl over 100 more attempts for Jevan Snead.

I guess my points on this issue are twofold:
1. This team passed a good bit.
2. Even if they hadn't, we still won nine games.

One last thing to really get that comment thread going:
Casey Dick's passer ratings in 2006 and 2007 were better than in 2008. Discuss.