The grades are in. All over the SEC blogosphere, our seasons are being commented on and criticized and it's about time for the Red Solo Cup to jump in. The SEC West is today and the SEC East will come sometime after the BCS Championship Game.


Nobody expected Alabama to go 12-0. Nobody. You Tiders all clamored on and on about how "Bama was BACK" and "motherfucking roll motherfucking TAHD" but we didn't listen.

"You really think a freshman wide receiver makes that much of a difference?"

"Haven't you been 'back' every preseason for the last few years now?"

Well, kudos, Bama fans. While a roster made up of mostly paraplegics and small children would have garnered a 12-0 prediction from a slew of your faithful, you've still earned your due credit. The lack of a plus to accompany your "A" is obviously due to your losses in the SEC Championship Game and Sugar Bowl. Thanks for pouring more gasoline on the already trite "OMFG teh BCS suxx" fire and giving people reason to badmouth the SEC, jackasses.

Next season should see some dropoff for the Tide as they lose two All-American offensive linemen and their three-year starter at quarterback. However, despite these losses, Alabama will be favored by many to win the West once more. 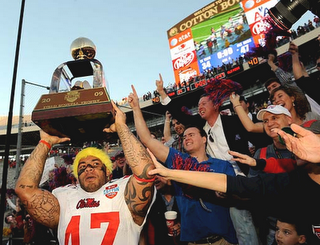 
Obviously, I'm a homer. Pointing that out in the comments would be akin to letting everyone here know that the sun will rise over the eastern horizon tomorrow morning. Save us all the time.

Ok, now, on with the explanation: based primarily on preseason expectations and how well they stack up against the season's actual results, it's hard to give Ole Miss a lower grade. While the losses to Wake Forest, Vanderbilt, and South Carolina still make my head asplode, the six-straight victories to end the season (with each victory literally being more impressive than the previous) made it clear to everyone that this Rebel season was a work in progress. The Rebels who won the Cotton Bowl would certainly defeat Wake Forest, Vandy, and South Carolina on any field, neutral or not. They'd hang tough with Alabama and, as ironic as it may be, more than likely lose to Florida.

This is a good Ole Miss team. Hopefully the success to end this season can be used as momentum into the upcoming season. Double-digit regular season wins should be attainable for the 2009 Rebel squad.


The Tigers should not have lost five games. While a close loss to Bama is respectable, being on the receiving end of a Georgia Bulldog blowout isn't. Jarrett Lee proved to be one of the conferences most successful touchdown passers but, unfortunately, he wasn't very discriminatory as to whose team was scoring the touchdown. Jordan Jefferson looked much better towards the end of the season and the mudhole-stomping defeat of Georgia Tech in the Peach (Chik-Fil-A, I love you, but don't mess with our bowls) Bowl should give LSU hope for a win or two more next season. Also, former Volunteer John Chavis should have LSU's relatively weak 2008 defense in much better shape for 2009.


When the season began, everybody was pretty sure that you were going to suck. Thank you for not disappointing.

Arkansas' season was, in many ways, akin to Ole Miss'. They started poorly, nearly losing to directional-Illindianachigan or something like that and ULM but finished on a somewhat strong note by defeating LSU on a neutral site. Over the course of the season, Arkansas' offense became one of the SEC's best, with Casey Dick putting up respectable numbers and Michael Smith earning ALL-Sec honors at tailback.

But why a "C?" Well, as I said before, nobody expected much out of the Hogs this season and, if Ryan Mallett can be the quarterback the Fayetteville wacky-asses Faithful hope for Arkansas should be much improved next season. 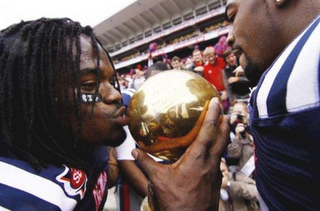 
Thank God for this season. I was getting incredibly fed up with folks in Starkville talking about how "Nutt'n good happens in Oxford" and how Croom was somehow going to win them an SEC title.

We at the Cup have been saying for quite a while that Sly Croom wasn't much of a coach and, finally, the world realized the clarity of our truth. His Gulf Coast offense continued to put up paltry numbers and his defense failed to force turnovers.

Their F gets a plus because they did beat a top-25 team in Vanderbilt, knocking them off of their wacky hotstreak, and earned a much less impressive win over Arkansas. The jury is still out on Dan Mullen as far as gameday coaching is concerned, but he's done a fair job keeping most of the talent Croom had recruited for this upcoming class.

Auburn: If the analogy lent to the use of letters past F, one of them would apply here


Hiring Tony Franklin, only to have him fired before the season's end because Kodi Burns isn't all he's been cracked up to be, really set the stage for the debacle of Auburn's head coaching search. Tommy Tuberville has been disliked by the GOB's in charge on the Plains for quite some time now (remember that whole Bobby Petrino fiasco a few years ago?) and, once both parties were equally fed up with one another, they finally were able to part ways.

Both of these coaching situations made it apparent to coaches across America that if you can't deliver on exorbitantly outrageous goals set forth by a group of bitter, old white guys you won't last long at Auburn, nor will you enjoy your time there. If that weren't the case, they would have hired someone just a hair better than the worst coach in the Big XII.

Hey, at least Arkansas fans have convinced themselves that you're going to soon be badass! Granted, it really has nothing to do with your players, school, or coaches outside of Gus Malzhan but, in times like these, you'll take what you can get.

Auburn could win anywhere from 4 to 8 games next season for two reasons: they're Auburn, and they're Auburn. The situation there is so messy that it's incredibly difficult to prognosticate but they've got the talent on both sides of the ball to make some things happen.