It's almost over. Praise God/Allah/Yaweh.

Dr. Saturday has some compelling evidence that recruiting rankings are a load of shit while, at the same time, not a load of shit. The two part series (who knows, maybe a 3rd is around the corner) can be found here and here. There really are two camps with regards to these reruiting rankings: the "it's bullshit" clan and the "it's the word of Rivals for the people of Rivals" clan.

Funny thing is, they're both right. That's what you get with inconsistency. You'll get right and wrong. You'll get good and bad. Rarely one can't exist alongside the other but, as any college football fan can tell you, sense and logic take a backseat to drama when recruiting season is on.

We've got an upcoming TLV piece and we may write it on this newfangled recruiting drama and obsession. It's been on our minds lately but the stress of "secret commits," "insider sources," and "employment" have kept us from blogging it.

The dead period begins on Sunday. This, as we all know, won't put an end to the recruiting talk, but it sure as hell will give us an excuse to ignore it.

"Hey, hey, Ghost, did you hear about Bobbie Massie and my secret source and..."

That's all you'll get outta me* until signing day.

One last thing: I'm sure you've all seen this, but Rivals has a good piece on Houston Nutt's recruiting. It's fairly well written but (for obvious reasons), quite vague. The most redeeming quality of the work is, by far, this very rare occurrence of the "Hellfire and Brimstone" version of the Right Reverend. 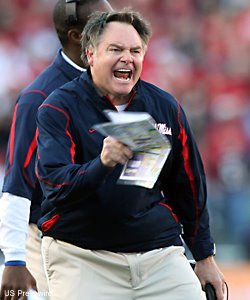 Repent for your fumbles!

*Me as in The Ghost of Jay Cutler. I can't deal with this crap anymore thanks to Da Coach O. Juco All-American is 'bout-it 'bout-it though, he'll likely fill y'all in.