These are the words of a one Juco All-American, a rogue bloggeur with a love and knowledge of Ole Miss unlike most. At the time of this utterance, the Ole Miss Rebels had pulled off what then seemed to be the most unlikely of upsets. It was a damn, damn good feeling which proved to be the first in a long string of good feelings. This season was incredibly memorable and absolutely thrilling to watch (and subsequently blog). During the points-orgy that was the 2nd half of our season, our middle fingers flew high, bourbon flowed like the Mississippi, and every Hotty was Toddied. 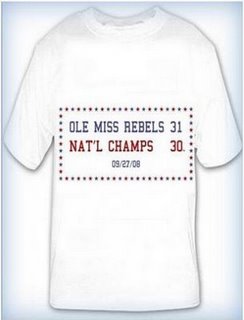 Yet, now, after all of those successes, folks are still stuck on beating Florida. They want to sell you ugly t-shirts and bumper stickers and whatnot because "DAMMIT WE BEAT FLORIDA WHOOO!" You would think that after having defeated the Gators during three of our last four meetings that we'd be used to it by now (ooooh, burn) but this is still some incredible novelty to many of us. Yes, it's a memorable game, and one of the single greatest games in the history of all of Ole Miss football, but to make that the focus of our very successful 2008-9 season is pretty durned foolish.

Unfortunately, this isn't the first time I've seen we Rebels fail to see the forest for the trees. In the original Abner's on the corner of University and South Lamar, there hangs a copy of the 1977 Notre Dame football schedule. The Irish were crowned the national champions of that season despite having one blemish on their record: a 20-13 loss to Ole Miss in Jackson. At that game, Joe Montana sat on the bench as the backup quarterback for the Irish as he watched the domers shock the country by falling to the Ole Miss Rebels.

Yet, this example is different from its modern counterpart because, for those times, such celebration of a single game was necessary. This is because the 1977 Ole Miss season was pretty forgettable otherwise. The Rebs finished that season without a bowl appearance, having lost to Alabama, Auburn, Georgia, Mississippi State, LSU and *gulp* Southern Miss (the State game was later forfeited, but still).

Why do this? Do you think this hurts the feelings of Florida fans or something? Well, it doesn't. After watching the BCS title game at a bar armed to the teeth with Florida fans, an Ole Miss cohort of mine began shouting "we beat the national champions!" The Florida fans effected enough to respond generally said things along the lines of "WHOOOOOOOO FUCK YES MOTHERFUCK YEAH BCS CHAMPS MOTHERFUCKERS!"

A few of them even thanked us for "lighting a fire under their asses" and took the time to congratulate us on our win over Texas Tech.

"The SEC owns the Big XII, broseph!" Yeah, I got that and, while incredibly douchey in that uniquely Florida way, it goes to show that our win over them isn't so much a blip on their radar screen. Hell, most Florida fans are glad they lost to us early in the season as opposed to shitting the bed against someone else (Florida State, Bama) with bigger BCS implications later on.

We became a nail in Tommy Tuberville's pine box, royally embarrassed LSU in Tiger Stadium, and stunned 90-something-percent of Americans after smacking around the Texas Tech Red Raiders of the "mighty" Big XII South. Yet, all some of us seem to give a rat's ass about was beating Florida in the Swamp.

Of course, it's more than alright to have cheered for the Gators in the BCS Championship Game. The Sooners are a dastardly, bastardly group and, as a fan of an SEC school (that isn't Georgia), you're expected to pull for the Gators in such a situation. But you should pull for them for the sake of the conference as a whole; not just for the benefit of Ole Miss. Their defeat of Oklahoma marked the third consecutive year in which the crystal football was hoisted high by SEC hands which makes, not just one, but five of our victories that much more impressive. The SEC IS the best conference out there and we no longer need to waste our time trying to prove that.

P.S. - Alright, I will admit that making Tim Tebow cry still reminds me of all of the good things in life (Sex, pie, the 2nd Amendment, et cetera)

P.P.S. - Oh, and to whoever my temporary "broseph" may have been that evening: the SEC does, in fact, own the Big XII. Suck it, SEC haters.