Oh my, what a tangled web we weave

Share All sharing options for: Oh my, what a tangled web we weave

NOTE: Information was obtained by visiting the official sites of the respective universities' athletic programs. Before you send me any more "he's not on our coaching staff anymore" emails or comments, tell your school to get their website in order. Capiche?

Today, Houston Nutt announced the signing of Terry Price to the Rebel staff. Price, who will be filling in for his cousin (no joke), Tracy Rocker, at the defensive line coaching position marks one of the latest in a long line of intra-SEC coaching hires. As the former DE coach at Auburn and, yes, Ole Miss under Tommy Tuberville, he should hopefully bring experience coaching and recruiting to the Ole Miss staff.

Also today, Lane Kiffin announced the hiring of Frank Wilson, the former runningbacks coach for our Rebels and the same to be for the Bulldogs of Starkville, will join his old boss Ed Orgeron in Knoxville.

Outside of the South people like to think of our region as being "incestuous." Now, while we're not really going out there and bangin' our sisters (or brothers, I'm lookin' at you Florida), we've certainly put together some wacky relationships among our coaching staffs. We're seemingly constantly swapping head coaches, coordinators, and recruiters like they're playing cards. Once coaches get here, they don't want to leave. Of course, we do (from top to bottom) pay the most and provide the greatest opportunity to recruit and coach the nations best talent, all while appearing on ESPN every other weekend so, this is somewhat understandable.

Since I didn't have dick to do at work today, I researched the extent of this conference-wide phenomenon. I even drew a nifty map which simply shows which schools share a common coaching history and put together a detailed list because it tricked my supervisor into thinking I was elbow deep in assignments. It is important for me to let you know that I didn't count former players, volunteer coaches, or graduate assistants because this took long enough as it is. An interesting point of note is that Vanderbilt does not have anybody on staff who coached at another SEC school (outside of a GA role) but has provided coaches to a couple other SEC schools. The image below can be clicked for needed biggification. 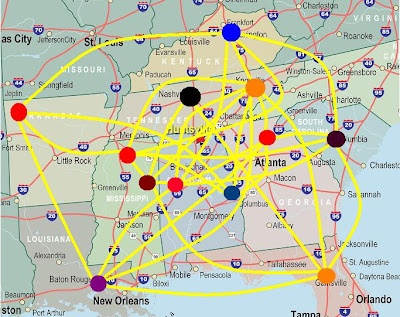 
I'm certain to have overlooked something somewhere, which is really just another indicator of how wacky this has gotten.


*Arkansas was in the SWC then so maybe this doesn't count.