Share All sharing options for: A moody, introspective letter to Graham Harrell

You don’t know me… No one really does, I suppose, but you, Graham: you will soon be privy to the smitten rage of my most blighted of hearts. You see, Graham, you are everything that my soul loathes. Heisman candidate, Texas All-American boy, the popular kid with the golden arm at quarterback… You were on my mind just the other day, while I was listening to the new Juliana Theory album that just leaked while taking pictures of myself from skewed upward angles. And it made me hurt inside, Graham. It just isn’t fair. I crouch in a tiny desk in graphic design class, as big as any three of the other kids stapled together, and none of them invite me to the Airships shows on the weekends. None of the guys on the team let me go to the Library with them after practice. Coach makes me go to class, or else play behind Chris fucking Bowers. I just don’t fit in, you see. I’m a freak. I spend all my time chasing you. You and your superficial pretty boy counterparts, with your clean jerseys, your waving locks of auburn hair. All I want is to catch you. Drag you down into the ground, make you taste the dirt that is my filthy, reprehensible existence. And I WILL catch you, Graham. That left tackle there? The crew-cut heifer who’s sworn away twenty years off of his strangled life, busting buffets, pushing sleds, lifting weights and pounding back protein to protect his precious Golden Boy? He’s a fucking suit. He’s corporate. He lines up inches from my wretched face, but he can’t know me. What was that move, he’ll ask? The one where I double-fake with my head, start to swim inside, then spin outside, leaving him standing there, a depleted mess of a man-mountain? Oh… don’t worry. It’s some move you’ve probably never heard of. You wouldn’t appreciate it the way I do. I am a fallen soul, Graham, but I can drag you down with me. Your victorious ride into the sunset is about to get wrecked. No bowl victory for you, Graham, no gunslinger’s grand finale, no vapid blonde bimbo on your arm. I’m here to take all that away, Graham. I’m six foot five, 265 pounds, faster than some of your receivers, my dad hates me, and I haven’t taken my pills IN A FUCKING WEEK AND A HALF!!!!!!!! Your happiness ends here, Graham. I haven’t been this upset since The Dismemberment Plan sold out and signed a big record deal.

It reminds me of this poem:

two shots of hate from a mouth as loud as a gun,
like an assasin ... who does it for fun.

two red roses sitting on my coffin, the wind blows, leaving only one
the world i know disappears...like the setting sun.

God, it makes my soul bleed. My heart is a blackness, LoveIsToTheDeath, 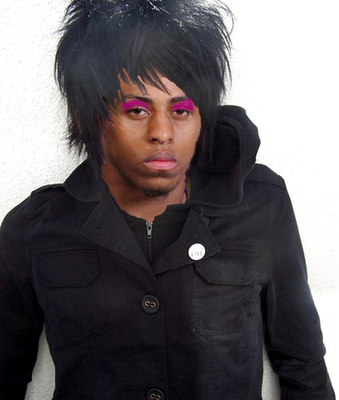 f0t0$h0ppe courtesy of the Ghost of Jay Cutler