Share All sharing options for: A Look Ahead: Ole Miss a Top 10 Team?

A lot of folks seem to think so. Whether they be southeastern newspapers, national newspapers, or some of the most recognizable names in sports journalism, people are predicting big things for our Rebel football team next season.

With good reason, too: We return most of our starters and impact players and have more than suitable athletes waiting in the wings for most of these positions. Jevan Snead should be the SEC West's best quarterback and Dexter McCluster will likely be recognized as one of the nation's premier all-purpose athletes. We do not lose a single halfback from our depth chart. Our secondary should be vastly improved.

Be hopeful. Be optimistic. Be proud. But, most definitely, be careful.

Older fans or the well versed in Rebel history certainly are aware of our disastrous 1964 season. It was in that year when the Rebels began the season with an AP #1 preseason ranking, only to finish with a 5-5-1 record.

Others will remember our 1970 season in which an Archie Manning led Ole Miss team started the season with an impressive 6-1 record. Archie was certainly the frontrunner for the Heisman Trophy and the Rebels seemed to be a lock for their second consecutive Sugar Bowl invite. Then, in a game against the Houston Cougars, Manning broke his arm and was unable to finish the season. The Rebels lost their final two regular season games and their bowl game while Archie finished third in the Heisman voting.

The most telling tidbit of them all though would be the dropped-jaw inducing fact that we Rebels have not started and finished a season ranked in the AP top-25 since the John Vaught era. We will most certainly begin next season with a very respectable ranking but, if history is any sort of reliable indicator, we can only hope to end the season thusly.

This does not only apply to football, as a certain dastardly son-of-a-bitch fella named Bryce Drew could tell you all about smashing the hopes of our Basketball fanbase (and then subsequently re-smashing them year after year... thanks, ESPN Classic).

It's not that I deliberately intend to be a bitter pessimist. I certainly think we will have an excellent football season next year. It's just that I am simply calling this like I see it. I feel that I have good reason for all of this media hype to worry me. I simply can't shake the memories of last year's baseball and basketball seasons (were ranked #2 and #15 at one point, respectively, before backing into their respective postseasons) or Deuce McAllister's fragile ankle (Deuce for Hiesman, y'all) from my steel trap.

If any season is the season to reverse this curse, this will be the one. Our most difficult games (LSU, Bama) are at home and we are not playing Georgia or Florida. We realistically should be favored to win a great majority of our games and that is nothing short of exciting. I expect an incredible Rebel fanbase next season with packed, raucous home stadium atmosphere and a Grove experience similar to that of 2003. This can be done if the players and coaches don't get too far ahead of themselves and we fans sack up and unwaveringly support our Rebels next season.

Let's just not start any sort of "Jevan for Heisman" campaign just yet. 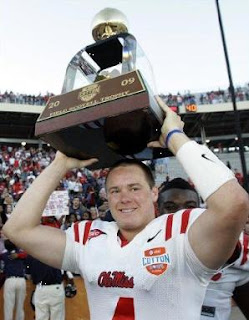 "For the sake of my musculoskeletal system, please don't hype me up too much."