In the wake of such a paradigm shifting victory, we're bound to see an inbox full of "OMFG's" and "hey lol look @ my Facebook album's." To everyone: thanks. We love getting reader feedback and, occasionaly, we like to share it with you. Below are two solid, Cotton Bowl-related gems which we've received.

First, a reader (one "Taylor D") submitted this photo of a dapper young squire holding up a sign which a Texas Tech fan left behind in what I imagine was unfathomable shame. 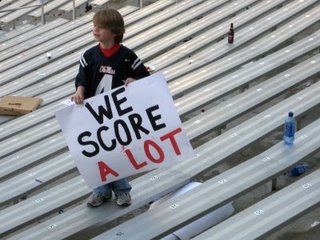 You score a lot, huh? Well, we score more apparently. Thanks, Taylor and, to whomever that young man is, nice souvenier.

The second bit comes from a young woman (we'll call her "Longlegs Lenore") who recently earned herself a job doing some fancy schmancy stuff a blogger couldn't hope to understand. The story of her hiring was a bit of a roundabout kinda thing. She and this other young woman were finalists for some position, the other young woman "got" the job, only to be turned away during her closing interview because the big boss man was apparently unimpressed. He calls our faithful reader back up then interviews, likes, and hires her. But, there's more to the story:

...the other candidate that was initially going to be hired over me, who had a Master's in Legislative Affairs and failed to impress in the final round......

She went to Texas Tech.


We r all up in ur job inntervyoo, steelin ur fyootur kareer. Oh, and congrats on the job, 'Legs.

Keep the submissions coming. Oh, and sorry for the slow pace as of late. We're working on something, alright? You'll get to see it sooner rather than later. Just chill.