Share All sharing options for: Wow. Take THAT Alabama!

Auburn University has announced that they are hiring Iowa State head football coach Gene Chizik to replace Tommy Tuberville. This is spectacular.

How do you fire a coach with Tubbs' track record in the SEC for a single down year (when his team went 5-7) and then turn around and hire a coach whose head coaching credits include only a 3-9 season and a 2-10 season? Tommy Tuberville is one of the top fifteen coaches in the country. It blows my mind.

I expect this to splinter the fan base a good bit. We'll get Rodney Scott and probably Raymond Cotton now. That's exciting.

Don't expect Auburn to be competitive next season. They'll have coaching that is significantly worse with a roster that's not significantly better. Good job Auburn administration. You did something I didn't think was possible. You showed Ole Miss fans that there is at least one school in the country with an AD that satisfies their fans less than ours does. 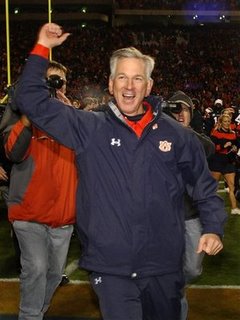