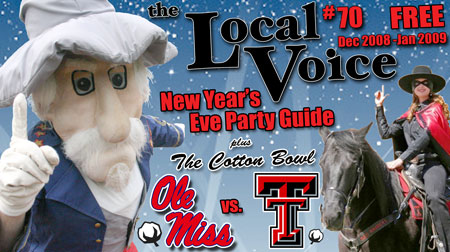 Click the graphic for the full PDF. Look below for our column as written by The Ghost of Jay Cutler.

Rebels, the time is nigh. On January 2nd, we will have made our long anticipated return to postseason college football play and we must make sure to convince all observers not of the Ole Miss persuasion that we're going to be here for awhile. To effectively do this, we must convincingly defeat a team which many feel are worthy of a BCS title in some bizarre, Texan universe: the Texas Tech Red Raiders.

This will not be an easy task. Texas Tech was a mere 44-point ass-beating at the hands of the all-worldly Oklahoma Sooners away from being the undeniable number one team in the land and has some excellent, Heisman-worthy talent on the offensive side of the ball. If we're not careful, these Red Raiders could score at will against our Rebel D and simply keeping up with the offensive pace that they will undoubtedly set will be a challenge.

I don't mean to alarm you, dear reader, and I don't mean to sound like a pessimist. While this bowl opponent could prove to be one of the most difficult we've ever attempted to surmount, a Rebel victory is nowhere close to impossible and our team and coaches are putting together a helluva game plan to take care of business on the field.

Now, we, the fans, must put together our game plan to deal with these pesky west Texans off of the field. While there certainly isn't a definitive and brief (key word) list detailing all of the problems one could potentially encounter with this, err, unique fanbase, I'm going to do my best to arm you with the tools and knowledge you'll unquestionably use over these next two weeks.
So, without much more ado, I present to you The Red Solo Cup's Guide to "Understanding" the Red Raiders.

-They're all from rural west Texas. Don't logically assume that there are Red Raiders from the *ahem* sophisticated metropolises of Dallas, Houston, or San Antonio. While they may have mailing addresses or even own real estate in these areas, their hearts and minds are held captive in Lubbock. Flat terrain, dust storms, alcoholism, and grizzled characters fit for Cormac McCarthy novels are all that they will ever know. Just picture Yosemite Sam with an engineering degree and a generally vulgar demeanor and you've got a Texas Tech fan.

-Their students have the air of a an MTV show about them. Shiny hair gel, baggy pants, and black tees are all the rage right about now on the Tech campus. Couple that with a few "brahsephs," petty drama, and Smirnoff Ices and you've basically got The Real World: Lubbock every day among their student population. They're loud, crude, begging of your attention, and unapologetically obnoxious. Why is this? Well, most of this is due to the fact that...

-They suffer from a horrible case of "Little Brother Syndrome." This season is the greatest Tech season in recent memory, if not ever, and they're still not even the most relevant team in their own state. Hell, it would be hard to argue them as historically being anything better than the 5th most relevant NCAA program in the Lone Star State. Just imagine a larger, louder Southern Miss in an inconsequential city on the Texan plains. The world is out to get them and they know it. If the oftentimes bizarre attitude of the Ole Miss fanbase can be attributed to historical relevance, the same for Texas Tech could be attributed to decades of people forgetting about their existence.

Tread lightly and carefully, Rebels. We've got quite a foe with which we will be dealing and it's going to take a complete effort on our collective behalf in order to vanquish them. Hotty Toddy; I'll see you in Dallas.