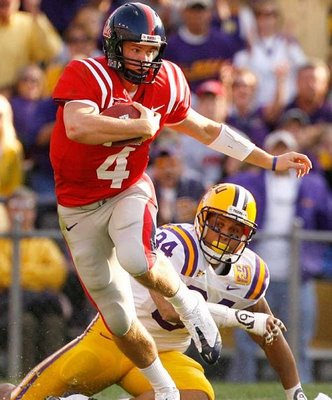 This is the best photo I could find of the guy.


Rahim Alem, the second defensive end on the inaugural SEC Power Poll All-SEC team, has been a phenomenal defensive force for the Bayou Bengals this season. The Junior out of New Orleans tallied eight sacks, seven quarterback hurries, two forced fumbles, a pair of pass deflections, and a blocked kick.

However, despite these successes, I will most vividly remember Rahim Alem for a very brief and inconsequential moment of moronic douchedom. Do you remember how, just before Snead took the final knee in Death Valley, he thought it cute to jump offsides and rough-up Mike Oher a little bit? Yeah, that was lame.

And stupid; who in the hell lines up against Michael Oher and thinks, "you know, I'd like to do my best to anger this hairless Yeti standing accross from me" and then actually follows through with it? It's a good thing for Mr. Alem that the game was winding down because that could have ended very, very poorly. 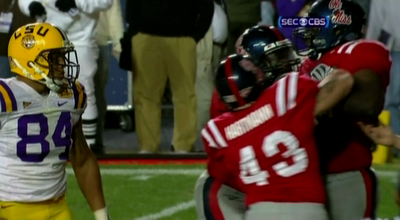 
Alright, so I'm biased. What else do you expect from an Ole Miss blog?

In all seriousness though, congratulations are in order for LSU and Rahim Alem for his selection to the SEC Power Poll All-SEC team. We're bloggers, dammit. We know what we're doing here and this should be taken as an honor of the highest caliber.


Up next: the SEC blogosphere's selection as our conferences best defensive tackles.