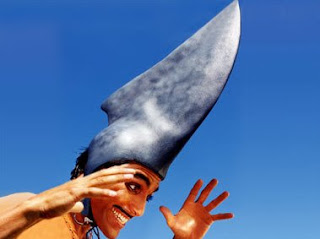 If you’ve been paying attention, you’ve surely noticed a recent development in Ole Miss football: our D is playing lights out. Our defensive line has become one of the nation’s best, our linebackers are all very solid tacklers, and our secondary is able to capitalize on mistakes made by opposing quarterbacks. While credit is certainly due to Tyrone Nix, Tracy Rocker, Chris Vaughn, Kim Dameron, , and (of course) Houston Nutt for coaching a former band of seeming misfits up to their true, badass potential, these players and their newly discovered swagger deserve most of the accolades.

Peria Jerry is impossible to block. Seriously. Just try blocking that guy. Next time he’s loading up on Moo Goo Gai pan at the New Hunan, stand between him and the steam trays and see what happens. In about a half of a second you’ll be rolling on the floor suffering through violent, spasmodic fits of bloody vomiting while he’s casually searching for the duck sauce.

Jerrell Powe has shown a lot of promise over the last couple of weeks. His performance in the Egg Bowl was certainly impressive, despite the fact that his two sacks and absolutely hilarious (I had tears in my eyes) interception against State came against a group of matadors wearing football pads.

Greg Hardy found his magic shoes and he, along with Kentrell Lockett and Emmanuel Stephens, has been able to establish a pretty terrifying pass rush.

Tony Fein causes opponents to wither on the spot. His tattooed bazookas which he’s been able to convincingly pass off as "arms" most likely play a pretty solid role in the intimidation factor. I still have a pretty kickass mental image of him ruining Charles Scott for a 5 or 6 yard loss a few weeks ago.

Ashlee Palmer and Allen Walker are prototypical outside backers. They’ve both got size and are fundamental tacklers, but they’ve also got incredible speed and agility. Palmer’s graceful interception against State is evidence enough of this.

While many are quick to criticize our corners (and appropriately so), you’ve got to appreciate the unselfish moves a few of them have made with regards to position changes. For Marshay Green to make the switch from wideout to corner and not fuck it up too horribly says a lot for his competitive drive and athletic abilities.

Toss in guys like Marcus Tillman, Lawon Scott (a big surprise to many this year), Ted Laurent, John Cornell, and Marcus Temple and we’ve got some quality depth at several defensive positions.

Perhaps the most important factor in this defense’s success though is the high level of confidence and teamwork with which they play. This defense does not look like a group of individuals but rather operates with incredible cohesion. Perhaps the strongest piece of evidence for this claim is the defense’s self-applied moniker of "Landsharks." 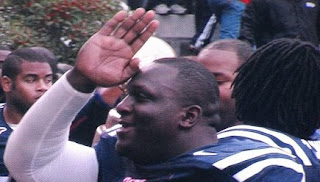 I’m certain you’ve seen this before. What you may not know are the origins of the hand signal and the unusual nature by which it was embraced by the defense.

While this is only a story based on second-hand information, both of my sources are pretty good in that they’re very much in touch with the goings on of the Rebel football program. Basically I wasn’t told this by any particular player(s) first-hand so take it for what it’s worth.

Apparently, Tony Fein started using the term "Landshark" in practice a few months ago. During one of his better days on the practice field, he told the defense that he was a playing like a "Landshark" and threw the hand-fin up on his helmet. At first, his fellow defenders thought this to be, well, ‘tarded. Tony, however, did not cease being a self-proclaimed. As practices wore on, Tony got better and better and with his growing confidence, kept flinging up his fin. Eventually, this grew on a few of his fellow defenders.

The first time that I can recall seeing it was during the Florida game. Powe rocked a shark’s fin during the victory celebration if my memory serves me well enough.

As the season progressed, and as the wins continued to pile up, the Landsharks moniker evolved from something Tony Fein did while being goofy (please don’t hurt me Tony, I’m only a bloggeur) to a symbol of pride and unity among our defenders.

Now, I don't see how any Ole Miss fan couldn't love it. Our defense does it to remind the fans, the opponents, and eachother that they're badder than Hell and they're not afraid to ruin somebody. Ask Tim Tebow's Heisman hopes. Ask Jarrett Lee's ankle. Ask the entire offensive depth chart of Mississippi State. These sons-of-bitches are a group of Landsharks. No, we don't know exactly what that means, but if you don't acknowledge their collective fantasy terrestrial-fish alter ego they'll drop your ass like a bad habit.