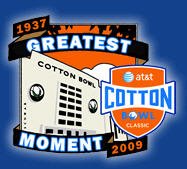 Recently, a representative from the Cotton Bowl sent us an e-mail to discuss a poll that they were conducting over at their website. Having discussed it at length with them, we felt it was worthy of a post on our blog. Here is the entirety of her e-mail to us.


Hope you’ve had a nice Friday. As the Rebels gear up for their matchup against the Red Raiders, thought you might be interested in a little Cotton Bowl history… it has had many memorable moments in its 72 years. Now here's your chance to choose THE Greatest Moment in Cotton Bowl History for a chance to win tickets to the 2009 or 2010 game! Go to www.attcottonbowl.com/vote or AT&T customers can text A, B or C to 7313. Choose from three classic plays selected by the Cotton Bowl Committee:

We are currently in talks with this nice woman to get a media pass to the game as well as merchandise that we can give away to you all. Please go vote on one of their three cotton bowl moments. My favorite is "Bench Tackle" because the player thought, for a moment, that refs wouldn't notice when he ran onto the field.

We are going to give away the Cotton Bowl merchandise (most likely a hat) based on who wins a bowl pick'em that we will launch later today. I hope you'll all participate in that since we actually have a prize to give now.

I'll have the bowl pick'em set up very soon.