The Conerly Trophy is a bit of a joke, but who cares?

Share All sharing options for: The Conerly Trophy is a bit of a joke, but who cares?

Last night Juan Joseph, quarterback at Division III Millsaps was awarded the Cellular South Conerly Trophy. Joseph beat out Michael Oher, a four-year starter at left tackle, and Peria Jerry, the leader in the Southeastern Conference in tackles for loss. The Conerly Trophy is awarded to the most outstanding collegiate football player in Mississippi, and previous recipients of the award include Patrick Willis, Eli Manning, and Deuce McAllister. There's no homerism in that list. Of the other previous winners Jerious Norwood is the most notable.

Which supports my contention that the Conerly Trophy does not, in fact, even regularly go to the most outstanding collegiate football player in Mississippi. Take 1998, when Adalius Thomas was a first-team All American at defensive end with 71 tackles and 12.5 sacks. James Johnson, running back from Mississippi State, won that Conerly Trophy with a respectable, but not All-American 1383 yards. Or Titus Brown, who led the SEC in sacks last season, but lost the Conerly to Damion Fletcher.

While it's certainly not the most accurate of awards, it's not the most prestigious either. Are Mike Oher and Peria Jerry, all-American level talents at their respective positions, better football players than Joseph? Of course they are. Are they all boo-hooin' over it because they didn't win? Doubt it. They've got a bowl game to look forward to and would easily take their first round draft pick 10 times out of 10 over some trophy given out by a somewhat-reliable cell phone company out of Ridgeland. Juan Joseph put up some gaudy numbers (67.6 completion percentage, 3,462 yards, 32 touchdowns, 6 interceptions) and won 11 straight games. Millsaps was ranked as the 3rd best team in their division before heading into the playoffs.

So? Just let the young man have his fun. He's earned the praise he's getting and I'm sure Jerry and Oher don't mind letting him have the spotlight for, hell, a week at the most. They're going to be soaking that shit up for a decade or so in the NFL. 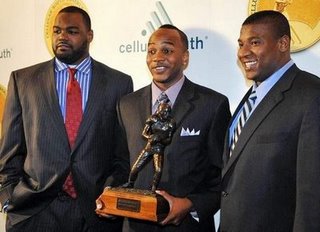