Another Message from The Right Rev. Houston Nutt

Share All sharing options for: Another Message from The Right Rev. Houston Nutt 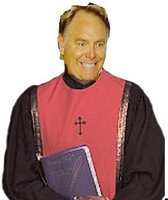 I want you to know that I have spoken with the Almighty. And, as I told the flock so many months ago when I came to the Vaught-Hemingway First Evangelical congregation, I knew that the call would come and would come soon. You can believe, children, that now it has. I have heard the call, and we will answer it together.

It is the call to revival.

For today's message, we'll be reading the story of Elisha.

1 And it came to pass in those days after the prophet Elisha had made an end to vanquishing the Saurians of the Swamp and the men of The Plains that the Almighty did call him to great revival in the city that is known as Dallas. 2 "And there," told the Almighty to Elisha, "you shall meet a foe who shall have won great fame and honor by his petty and vain-glorious registering of points. 3 But you shall not fear, Elisha, for I have seen how this foe does meet the meek defenses on the field of battle. As has been foretold, 'He will increase his pride by increasing his score, but the increase will be to his decrease.' Vanquish him, but do not slay him for I promise that sure as his name shall mean 'decrease,' he will bring about the decline of your enemies in Red Stick." 4 And so, as he was called, Elisha went to Dallas and he met the foe at the thirteenth hour of second day of the New Year, and he was vain and prideful as had been foretold. 5 He bore a garb of orange and white and called himself a man of cattle from the still waters. 6 But Elisha conducted himself as he was instructed and vanquished the man of cattle, but did not slay him. And Elisha was given cotton for his reward. 7 Then, Elisha said, "Surely as I have been told, I have vanquished but not slain the man of cattle from still waters whose very name means decrease. 8 And I have seen that a day will come when a new prophet shall emerge from swine and lead my people to another great revival. 9 They shall meet this same man, and they shall defeat him again. From their victory, they will be called to meet a new foe in the land of Dallas. 10 But this foe, too, shall be haughty and vain-glorious. 11 The people will not be afraid. Their leader, he who did emerge from the swine, will move about in such a way that will confuse them, but he will lead the revival and vanquish the new foe. 12 So it has been said, and so it will be done."

I have heard the call, church. We have vanquished the man whose name means decrease, and as a result the call has come down. It's time for a revival. We're going back to the promised land, Amen? And we're gonna do just like Elisha did, brothers and sisters, and vanquish the prideful and the vainglorious. Ooooh that'll be a beautiful day! Ooop! Wait! Giggity! I've just had a vision, church. I saw a man wearing an eyepatch and he was wearing black and red. Standing beside him were four or five quarterbacks and none of them ever played in the NFL. Oh, it's beautiful, church! I see ... one of the quarterbacks stepped up and that music from Jaws started playing.

Oh, brethren! I ... I ... I've been told that I won't see anymore visions until Bishop Boone pays me back for those gray pants. Until then, brothers and sisters, stay strong, stay vigilant, and prepare for revival.