Women of the Opposition: LSU

Share All sharing options for: Women of the Opposition: LSU

LSU fans are known for their barrage on our senses. Their smell, which as everyone knows is corn dogs/casino buffet/cigarettes all mixed together, their sound of Cajun speak and the sight of their women.


LSU has the extreme disadvantage of being the only university that's worth a damn in the entire state, which means PLENTY OF UNFORTUNATE LOOKING FANS.
And look at this hotty.
Oh shit, that's a guy.
For the most part, it seems the LSU female faithful enjoy wearing jerseys with denim skirts(see: here). How thoughtful you are to take the time to climb off of last night's mistake, grab a wrinkled jersey, grease up the hips and squeeze into your skirts. Quite the classy bunch.
I do have to give some credit to the LSU Golden Girls. If nothing else they're skinny, so they've got that going for them.
And they don't look like this.
Then, there's a photo that might be one of the more unsavory women I have ever encountered on the internets. 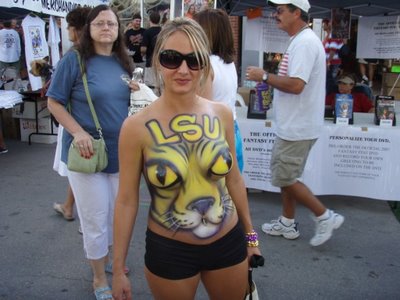