Here's our article from the latest edition of The Local Voice. Enjoy, and pick up a copy. 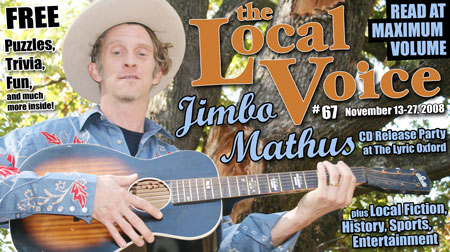 Let’s be upfront for a minute: this Saturday, Ole Miss plays the Warhawks of Louisiana-Monroe. This is super boring. Instead of providing hard-hitting coverage of this riveting Sun Belt matchup, we’re moving skraight to LSU. To set this up, we’ll recount the respective weekend sagas of two friends of mine.

Both friends go out of town for a weekend getaway, in search of some killer bars and the company of women of loose character. Friend A gets out to a slow start: he eats dinner and drinks with the guys, putting a half-hearted effort into playing the field, and heads to a house party, where he will inevitably pass out alone and wake up shivering at noon. Friend B embarks on his evening sojourn with reckless abandon and enthusiasm. He and friend C (who is totally not important) meet two promising lasses before the clock strikes ten, exchange phone numbers, and coolly stroll away, after arranging a point of rendezvous for later. Friends B and C stalk out a spot at a nearby sports bar, boisterously pre-gaming and entertaining thoughts of the spoils to come.

Meanwhile, Friend A has happened upon a most serendipitous situation: while surveying the various rooms of the house for the best place to retire, Friend A lazily stumbles into a bedroom, where two pajama-clad females have already staked out for a friendly slumber. Friend A, perhaps not realizing what lies in front of him, cautiously inquires if he might share the bedspace with the young coeds. Somewhat surprised at receiving an affirmative, Friend A crawls into bed, chats for a minute or two, and quickly passes out cold. Despite his inability to take a promising situation into his own hands, Friend A wakes up half an hour later, dazed and confused, but definitely making out. With both girls. Suffice it to say that Friend A, along with any red-blooded male, considered the evening a smashing success.

Let’s check up on Friend B: with an evening of glorious victory well within grasp (the ladies have been summoning him via textual message), B pays his tab at the Public House, hops off of his barstool, and strides off, a confident swagger in his voice: "This one’s in the ba- oh shit…" And shit it was, indeed: in the face of great potential and opportunity, our hero had pooped his pants. "Well, time to go," says B, with dismay and embarrassment in his voice. B calls a friend to retrieve him at the bar and sulks home in defeat.

So if you haven’t figured out by now, Friends A and B represent LSU and Ole Miss; their stories (Actually true. You can’t make this stuff up), miniature allegories of seasons past. Just last year, LSU finished a haphazard 2-loss season in a BCS Championship over . Ole Miss hasn’t both started and ended a season in the top 25 since the Vaught era (no research on this, but I’m pretty damn sure). So is this the year that fortunes change? LSU climbed as far as #3 early this year, only to lose three games due to poor QB play and some suspect coaching. Ole Miss started off slow, following a huge upset over with a disappointing loss to USC, then rebounded with back-to-back SEC wins over two new rivals with plenty of bad blood to go around. Winning out could mean a Cotton Bowl berth and a possible 9 win season. Losing this game could punch a ticket to or, coupled with a disastrous Egg-Bowl loss, keep the Rebels home for the Holidays for a fifth straight year. At the Red Solo Cup, we’re calling this one: the kid with the shitty pants gets the girl in the end. Hotty Toddy, and Go to Hell LSU.