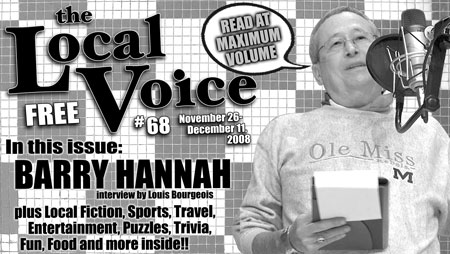 So TLV has been released for this week, and, shockingly, they've decided to let us continue writing. You can read the entire newspaper at their website. You may also read our article below.

How good did that feel?

It has been a long, long time since Ole Miss arrogantly waltzed into a hostile environment like Tiger Stadium and beat an opponent so convincingly. Our offense scored early and often. Our defense held one of the SEC's best running games to a puny 37 yards, intercepted two passes, and gave LSU's quarterbacks absolute hell. Our special teams were consistent and gave the Tigers fits via great kick coverage and a zany fake punt.

We ended the game by taking a knee on the one yard line. Why, you ask? We didn't need the damned points, that's why.

Yes, it felt fantastic indeed. But, Rebels, just because we are certainly going to earn a trip to either Atlanta or Dallas and currently possess a crappy bronze flower affixed to a piece of particle board does not give us the right to rest on our laurels. Yes, we've endured the toughest part of our schedule and yes, the Walrus' band of Maroons should not present us with much of a challenge but if you call yourself a Rebel fan you have no reason to not attend tomorrow's game.

If not for yourself or a group of furtive rogue bloggeurs with a snarky attitude, do it for Houston Nutt. He's taken a team that didn't know how to win and turned them into a competitive group of young men with some serious swagger. Do it for Michael Oher, Peria Jerry, Mike Wallace, Jamarca Sanford, Jason Cook, and all of the other seniors who endured some of the worst football Ole Miss has ever seen before bringing you this breakout season. Do it for the the State of Mississippi, which needs to see her flagship school atop of the magnolia football world.

Do it because Mississippi State and all of those jackasses who ring those damned bells are still feeding off of their 17-14 comeback victory against the Ed Orgeron and Brent Schaeffer show. I haven't forgotten how miserable last season's Egg Bowl made me feel. Sure, that debacle allowed us to fire the buffoon running our team and hire a coach who has a 9-1 all time record against the Bulldogs, but that did not, for me at least, make the loss sting any less.

Tomorrow begins a long streak of dominance against Mississippi State. Don't do yourself a disservice and miss it.

If you've still yet to decide upon whether or not to attend the Egg bowl and are reading this, allow me make your decision for you: go.

Whatever, I don't care. I'm a busy guy. I've got stuff to do, family to greet, and sweet potatoes to chow on as well. But, guess what, the Egg Bowl is on our just after Thanksgiving. This shouldn't be a new development in your life. This didn't just spring up on you last-minute.

Pack the Vaught, stay until the last note of "From Dixie With Love" is played, be loud, get rowdy, and send these seniors to their bowl game knowing that we, the fans, are with them all the way.