Over the last couple of weeks, we've gotten some kickass feedback. The two following sets of photos arrived in our inbox much to our delight. Enjoy.

First, a couple of self proclaimed "displaced Rebels" were responsible for the Ole Miss related signs at the ESPN College Gameday which was held on the Vanderbilt campus a month or so ago. Their email and photos follow.

As you may be aware, Vanderbilt University recently had the privilege of hosting ESPN's College GameDay. Like any dedicated SEC football fans would do, we fought our way tenaciously to the front lines on that shockingly early Saturday morning (5:00 am). As you would expect, our friends carried witty signs against the opposition of the Auburn Tigers, such as "I got my G.E.D. at Auburn" and "My GPA > Auburn's PPG." Other signs, in a self-deprecating manner, made fun of Vanderbilt's propensity for studying, to wit the sign that read, "You People Are Blocking The Library." Though deeply proud to be Commodores, we took the opportunity to proudly informed the nation:

And with our voices steady, we called "Jevan Snead for Heisman" and lamented how "Phil Fulmer Ate My Other Sign." Additionally, we announced Jerrell Powe's Heisman candidacy and fearlessly observed that "Tommy Tuberville Has Big Ears." 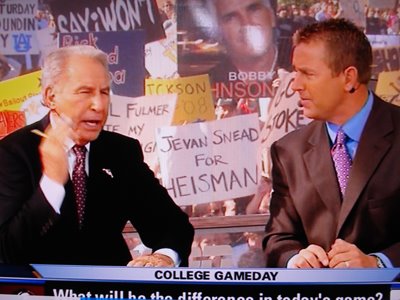 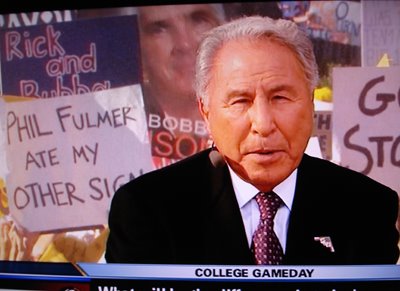 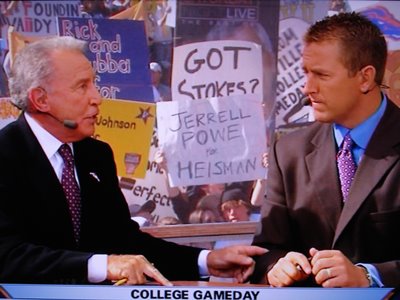 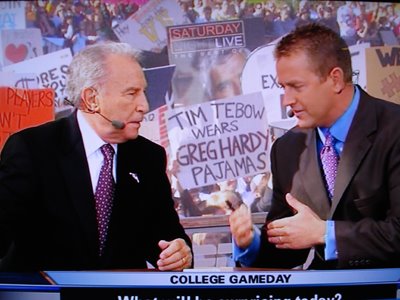 Dont_Forget_Patridge, another loyal reader of ours, observed this absolutely frightening Auburn fan in the Grove last weekend. If you thought Florida's jort epidemic was bad, then you ain't seen nothing yet. Speaking of Florida and Auburn, seeing this makes it pretty darned clear that the Original Bulldogs' rivalries have sprung out of the Georgian hatred of poorly thought out leg wear. Who knew? The best part about these pictures is that this WarPlainsGer seems to just be awkwardly and uninvitedly standing in someone's tent in the first photograph; almost as if he just walked up and said "War EAGLE can I have some chicken strips?" to no response. 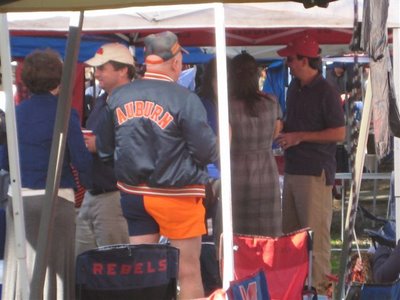 In the second photo, folks are talking to him but at quite a noticeable distance. Normally folks with really awful body odor have more intimate conversations than this fella is having with man-holding-bottled-water. 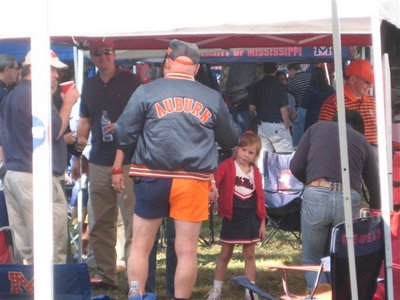 Daddy, why is the scary man eating our sausage-n-cheese balls?