An Open Letter to the LSU OL

Share All sharing options for: An Open Letter to the LSU OL

To the most esteemed Louisiana State University Offensive Line,

And so it came to pass, when the Archduke of Sackenstein made an end of corresponding with one John Parker Wilson, that much praise and exaltation was thrust upon him for his skillful and virtuous prose. Upon observing this, I have concluded that, as a scribe of the highest order and dexterity, my desire to engage in fruitful intercommunication should be fully realized. Thus, shouldst thou will to critique mine own manner of parlance, prithee, do keep thine own tongue faithfull to the manner of speaking of thy forebearers.

Ah, young Tigers, for thine is the glory of the Southeastern Conference's Western Division when strictly speaking in a sense of recent tradition. However, lest you not be decieved by my words, let it be known that for in this season the Crimson Tide of the University of Alabama has risen to lofty heights just below that of their supporters and colleague's wildest most mundane of dreams.

Yet and so, whilst sitting on the verge of another early December spent at a fair distance from the Divine Kingdom of Atlanta, my Rebellious legion and I must fight for something other than the right to loftily fly victory banners over our stronghold. Nay, we Rebels will fight for something which is far less glorious yet nearly as pride inducing: a consolation banner.

"Lo, here be the realm of the second most victorious football legion in the Southeastern Conference's Western Division during the 2008th year of our Lord."

The beauty of said imagined banner brings a tear to the mind's eye.

My desire to obtain this prize and to bring my rebellious legion to heights deemed impossible nearly one annum ago has become insatiable. My, nay, our quest must be successful. Our goal must be reached. And, as pitifully unfortunate as it may be, thou standest accross our path. Thy charitable leader and gaudily crowned king will not find the capabilities necessary to halt our destiny. Despite your anticipations or most hopeful desires, thou shalt be vanquished.

Lo, how fate hast collided our paths. This upcoming Saturday, upon the Sun's falling and as the blackness of nightfall washes over our realm, ye shall taste the most shameful and bitterest of defeats whilst I, along with my colleagues, hoist high thy floral phallus for which we have bargained.

Invoke thy aid to my adventurous quest, that as my middle finger intends to soar bove the Louisianian mount, whyle I attempt things unattempted yet in prose, rhyme, or football.

Vis-a-vis, ergo, concordently and respectfully with nothing but my sincerest regards and sympathies, 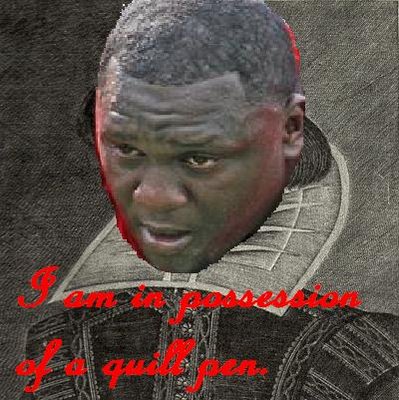