It's not just us, LSU

Share All sharing options for: It's not just us, LSU

That's right, it's time for you to know, LSU. All the bloggeurs took a vote and decided that we here at the RSC be the ones to tell you. Um, gosh, I don't know how to say it.


Everyone really hates you. 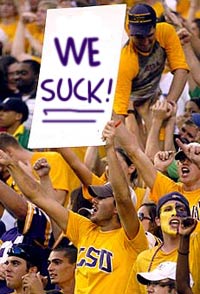 Even your own fans know it.
We didn't know how else to tell you except through the various signs spotted across the college football universe(see: here, here and here).
Other fans hate LSU for various reasons: your coach, your tradition, your fans, etc.
But to sum it up, it's your arrogance that gets me the most. You don't know how to win with class or have class at all come to think of it. For example, LSU fans chant L-S-U at the Sugar Bowl when they aren't even playing in it.
Granted, if Ole Miss won a national championship, I would be much more of an asshole to every other SEC team or fan I came into contact with, but for some reason, maybe because you were so irrelevant for so long, you just have to bask in your current glory spewing your "TIGAH BAIT" propaganda and flinging Evan Williams bottles at opposing fans.
So there it is, LSU. Our hate week has yet to come to a close, but just in case you thought Ole Miss fan's hatred was due to jealousy, don't you worry. Everyone hates you.