A Defense for Jevan Snead

Share All sharing options for: A Defense for Jevan Snead

People were actually booing Jevan Snead during the early parts of the Auburn game. Yes, as unbelievable as that may sound, the greatest offensive producer the Rebels have had since Eli Manning was being booed because of his slow start.

We all saw that Jevan had a poor first half, but he did nothing to jeopardize a victory. He threw no interceptions and did a decent job of keeping the Auburn defense at bay. True, he did make some horrible throws and true, his receivers weren't helping very much but Jevan most certainly did nothing which would warrant him being booed by his home crowd.

If you booed Jevan Snead you're likely an idiot.

Here you'll see the SEC statistics leaders. Scroll down to the passing categories and take a look at Jevan's numbers as they stack up against other SEC quarterbacks. What? You're too lazy to do that? Well, fine, I snagged a screen capture. 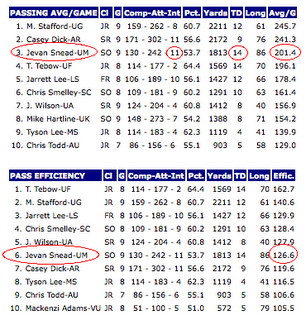 Look. While Jevan isn't setting the world on fire, he's certainly far from horrible. Yeah, he and Casey Dick lead the conference in INTs (which has subsequently hurt his efficiency rating) but he is tied with Tim "Heisman" Tebow for the most TD tosses in conference. He's third in yards per game. Third! Jevan has secured his place as the third best quarterback in the conference with behind Stafford and Tebow who, without any doubt in my mind, have better lines, receivers, and coaches.

Yet, you asshats booed him. That's ok, though. He showed up after his rocky start, tossed his two touchdowns and left the field a winner.

Snead is young and has only had this season to really play football (as opposed to true juniors Stafford and Tebow) and has showed us that he'll keep our passing offense at a truly competitive level over the next three seasons. Give him the credit he deserves, especially when he's just having a slow start to an early-day game.