After a very eventful weekend, two related truths became eminently clear. First, where "it" is an obscure and indefinite concept and "that" is winning football games, apparently doing "it" the right way is the wrong way to do "that." Second, it is seems clear that Houston Nutt will continue his dominance of Mississippi State in his new job, only this time he will perpetually deprive them of an 80-year-old piece of pre-poultry. Because these things were clear, Sylvester Croom is no longer the head coach at Mississippi State University.

It's a shame, too, because while Sylvester did not have a lot of wins, he had a lot of "wintegrity." What is "wintegrity?" Well, it's character. It's discipline. It's all about building a program the right way, and, should you fail to actually build the program, perpetuating the fiction that you were doing it "the right way." It's not about guns or weed. It's about guns and weed (HOLLA!). And best of all, it's about leaving Starkville with that refreshing sheen and aroma that can only come from being compared to Jackie Sherrill.

So, recognizing that the Bulldogs both have lost Coach Crumz' wintegrity and will likely lose a great deal more for the foreseeable future, we've designed something that the 'Dogs can win consistently. The Character Cup. 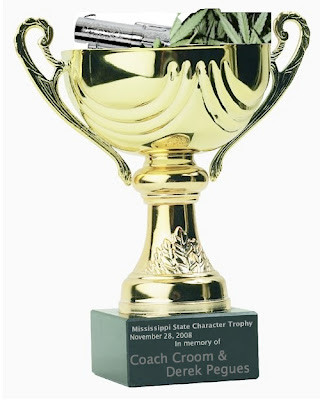 In memory of Coach Croom and Derek Pegues, the Character Cup will be awarded sporadically to comfort Coach Crumz' recruits that, lost without him, will almost certainly begin making poor decisions. This handsome trophy comes with a handgun and a marijuana garnish to remind Mississippi State players that geography is not the only way that Starkville is closer to Tuscaloosa.

Congratulations, Bulldogs. May you never stoop so low as stealing alarm clocks and pillows.