Women of the Opposition - Auburn

Share All sharing options for: Women of the Opposition - Auburn

The Ghost can't sleep, y'all, so he's Googlin' stupid shit through a half open set of eyes to put on the Cup. This week, women of the opposition will feature the good, the bad, and the scandalous (but not at all in that order). If you've got any you'd like to submit, GMail us or just drop something in the comments box. I don't know what's worse, the dog-jersey, the bracelet, or the thumb ring.

I know it's a costume, geeze.

I know this doesn't seem very "Plainsy" and I seriously doubt this has anything to do with the Auburn in the SEC, but I do find it pretty funny that a Google image search of "Auburn girls" yielded this likely Obama supporter (oops, did I just say that) young woman. 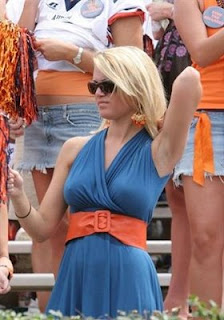 Who needs the support of a (certainly large) bra when you've got a big ol' belly-belt?

Finally, the scandalous. These photographs, while certainly SFW in it's purest sense, are not the kinds you'd want your boss (or, shit, even the janitor) catching you taking a peek at. I'm not going to put the image in the post but I'll link to them. There, I've warned you.

I'm pretty sure this chick was in a Playboy, and this girl likely doesn't have much in the way of "self-esteem."

Auburn wimmins: Keeping slightly ahead of the curve set by Alabama for over a century.