The Red Solo Cup made the front cover of this edition of The Local Voice with our list of Ole Miss-related Halloween costume ideas. Click the image for a PDF or, if you're too lame to read the rest of the articles (wif pikshures!) you can just read our piece below. 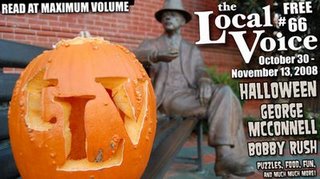 Got a Costume? Here are a few last minute ideas for Oxford Rebels... and the bored.

This weekend could easily shape up to be the second greatest weekend of the football season (the Presidential debate coupled with making Timmy Tebow cry cannot possibly be topped). On Saturday, the Rebels will be (realistically, this time!) looking to defeat the Tigers of Auburn and hopefully serve as an agent for the dismissal of Tommy Tuberville. However, before Houston's harrowing hopeful send their foes home with a loss, an electrified Oxford will experience what is likely to be the rowdiest Halloween in years.

I'm certain that all of our loyal readers are looking forward to this potentially unforgettable weekend, save for, of course, those poor and timid souls who have nary a clever costume idea. Well, never far, Cup fans, for we have some suggestions we feel are well within in the budgets of most and, with the right swagger, can be pulled off by almost anyone. Enjoy:


A typical Arkansas fan - Wear a bunch of tacky, red colored stuff while screaming loudly at all of your friends. Tell them how horrible Houston Nutt is, being certain to use incredibly poor grammar. When people continue to ignore you, start whining and rolling violently around on the ground. For this costume to be as realistic as possible, you need to be somewhat irrational; you know, like believing acupuncture is a legitimate medical practice or that the moon landings were staged.

A typical Mississippi State fan - The same as above, except you need to wear maroon instead of red, ring a cowbell, praise the greatness of Croom before bashing Nutt, and be poor(er).

Pete Boone - Wear a blazer with khaki pants and spend most of your night being overly frugal and out of touch. If your buddy needs a drink, tell him that you'll need to raise the necessary funds and it'll take a long, long while. If he would like a Maker's Mark, get him the well whiskey and tell him it's Maker's Mark anyway. I mean, it's not like you owe it to him or anything, right?

Andy Kennedy - This costume looks exactly like the Hitman of video game and cinematic fame, except you need to know more than everyone in your general vicinity about basketball. Also, you must hang out at the Library all night or the costume won't count.

The Ole Miss baseball team - At the beginning of the night, be an absolute baller. Do your damnedest to make new friends, impress whoever it may be that you're courting, and get everyone to praise your excellence. Then, as the night is winding down, do something horribly, horribly disappointing.

Chris Todd/Kodi Burns - Put together this ensemble with fake blood, a tear-stained Auburn jersey, a Peria Jerry-sized footprint on your chest, and a handful of morning-after pills. Walk around all woozy-like while ordering plenty of Appletinis.

Tommy Tuberville - Wear a Clemson baseball cap with an Auburn cap over it. If you're into carpentry, put together a pine box with "3rd time's a charm" printed on it."

Dexter McCluster - Wear a #22 jersey, a dreadlock wig, and some receiver gloves, making sure to dip your gloves in a vat of bacon grease.

Jerrell Powe - If you've got some stilts, incredibly baggy clothes, and a few hundred pounds of unopened bags of sand, you can easily put together a spot on Jerrell Powe costume. Be warned, though; a lot of folks are going to ask you're if you're "that lame-ass monster from Cloverfield."

Tim Tebow's Heisman Hopes - Buy an orange t-shirt. On it, print "I existed before September 27th."

Houston Nutt - Wear a cassock or a robe with a stole. Aqua-net the mess out of your hair. Carry around a mirror so you can be sure to look at yourself in it while saying generally goofy, overly Southern things. You'll look crazy, but people will love you. And deservedly so, simply because you won't be dressed like...

Ed Orgeron - If you're barrel-chested and somewhat incomprehensible, this is the costume for you. Wear a skin-tight New Orleans Saints polo and a coach's headset (only for looks, mind you). Drink a gallon of Red Bull and take a dip in a bathtub of raw shrimp to capture the necessary energy level and smell, respectively.