State of the Opposition - Week 2

Share All sharing options for: State of the Opposition - Week 2

The opposition is out to get us. Constant surveillance is required to keep accurate tabs on their where-abouts and goings-on. The British had MI-6 and James Bond. Nixon had G. Gordon Liddy. Lord Zed had the Green Ranger.

We have the internet.

September 4, 2008
Vanderbilt (Week 4; 2-0, 1-0) def. #24 South Carolina (Week 6; 1-1, 0-1) 24-17
In more ways than one, this is all very surreal. The the Ol' (consistently disappointing) Ball Team compulsively loses possession of the ball. Cocks quarterbacks have a combined six interceptions so far, and I feel validated ranking Vanderbilt above Tennessee in my SEC Power Poll ballot.

Samford (Week 3; 1-0) v. Faulkner (Who cares) 6:00 PM CST, Birmingham, AL
Faulkner is in its second season fielding a D-II football team. So, whatever you think will be the final score when Birmingham's bulldogs travel to Oxford, insert those numbers here in favor of Samford.

#13 Alabama (Week 8; 1-0, 0-0) v. Tulane (0-0) 6:00 PM CST, Tuscaloosa, AL
Did you know that Alabama beat Clemson last weekend? Because hadn't seen that yet. In other news "34-10" beat out "Got Recruits" and a picture of Saban with the caption "Bear Cub" as the most tatooed phrase in the Heart of Dixie last week. Tulane, meanwhile, retains its title as the hurricane-wrecked team unable to engineer an inspriring post-storm season win quarter. Alabama.

Arkansas (Week 9; 1-0, 0-0) at UL-Monroe (Week 12, 0-1, 0-0) 6:00 PM CST, Little Rock, AR
Yes, that's right, Petrino's deception knows no bounds. This time he's somehow convinced UL-Monroe that they can be the home team in a neutral site game at Little Rock. The fans, the funk, the feelings about one's sister - there's nothing neutral about Little Rock. The Hogs recover from their disappointing debut and develop a devastating dig to deliver against Tide fans when Alabama visits in Week 4.

#9 Auburn (Week 10; 1-0, 0-0) v. Southern Miss (Never Ever, 1-0, 0-0) 11:30 PM CST, Auburn, AL
I'm going to regret this. I just know I'm going to regret this. Because in fraternity with Kyle King ... I hate Auburn. But Southern Miss has an offense. A real live, I was probably wrong about Damion Fletcher, less quarterback questions than the Plainsmen offense that hung half a hundred on hapless UL-Lafayette, including 427 yards on the ground. You know how Tommy Tubberville has a way of losing games he should win, well, I'm taking Golden Eagle over War Eagle.

LSU (Week 13; 1-0, 0-0) - On Vacation
*Steps on soapbox* In yet another case of the Big Ten getting more credit than it should, Appalachian State had enough credibility going into its date with the Tigers in Baton Rouge, that it actually seems like LSU's win over the 'Eers is being considered, somehow, meritorious. That's stupid. Please stop thinking that a win over an FCS team (no matter what they're defending) answers any questions about this team. *Steps off soapbox*

Mississippi State (Week 14; 0-1, 0-0) v. Southeastern Louisiana (1-0) 6:00 PM CST, Starkville, MS
The only question that games against FCS opponents might answer is whether a team can fire its over-paid, under-performing coach any time in the next five years. This former offensive coordinator is like football benadryl. I mean, the Bulldogs will win, but wouldn't it be neat if the SELA Lions, who practiced all week in glorious Oxford, MS, were to dig deeper with salt-rock shovels the open wounds of Bulldog Nation.

And for good measure: 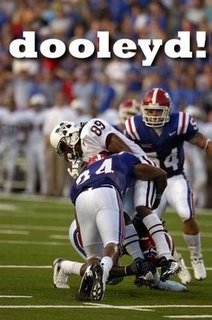