Once again, sorry for the late post game. Too busy enjoying what many have called the best weekend in the history of the University. Those of my friends that are aware of my writing on this here website have been calling me out on last week's post game report, asking what kind of ass I feel like for passing up on tickets to the game, calling out the team right before our biggest win in decades, etc., etc. Well, here it is folks: I'm a huge Rebel fan, always have been, and I don't have a bit of regret for being proven wrong by a tenacious Ole Miss team on the road. I don't regret watching this game in a bar full of my friends, getting tow' up, screaming Hottdy Toddy at anyone who cared to listen, and drunkenly trying to explain the significance of this win to the wait staff at Rancho Grande. I had a hell of a time. I know Ivory Tower and co. had a hell of a time. The Rebels played inspired defense and mistake free (enough) offense and got to mock-chomp the Gators, dreadlocks victoriously blowing in the Southern breeze. 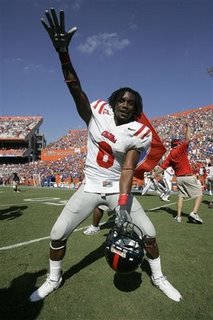 The defensive line is the best in the SEC. No doubt. We have at least four, probably more, NFL players on this line, and they're starting to play like it. Of course, Tebow saw all kinds of blitz packages, but you really can't replace that Jerrell Powe-shaped dent in the pocket on every play. Speaking of Powe's emergence, Ted Laurent showed why he's still technically the starter alongside Jerry. He's a beast, though this picture makes me giggle because he looks like a Macy's day parade float drifting angrily towards Tebow. And say all you want about the athleticism of guys like Knowshon Moreno and Percy Harvin: to me, the best SEC athletes are guys like Greg Hardy and Ricky Jean-Francois- guys that are just too damn big to be that damn fast.

The rest of the defense played well above their shoulders today as well. Sure, Florida gained a lot in the air, but there's a lot to be said for having those short passes over the middle met immediately with three or four white shirts and stopped dead. You can't let teams run after the catch on you all day, and the Rebel secondary didn't. Percy Harvin got his yards, sure, but at full health, he'll get them against anyone. The coverage skills of the corners are still less than Champ Bailey-esque, but I'll take that effort every time.

I was growing skeptical of having Eason in the game with Bolden and Davis on the bench, but he made one of the more athletic plays of the game with his 18-yard catch, run, hurdle, pirouette, and score. Brandon Bolden is still pretty badass, though.

Shay Hodge is also pretty badass. Hodge is the best overall receiver for Ole Miss maybe ever. Chris Collins would have been the 3 or 4 receiver on this team, Espy and Grant Heard may not have fared any better. On the topic of Hodge: I was under the impression that video review was adopted to determine the correct outcome of a play. It was in fact invented to fuck over Shay Hodge. Sorry Shay, you caught that ball. And you were forced out. And the other guy touched it first. Fuck you, Doyle.

Is today the first time Bolden has taken some snaps in the Wild Rebel? I haven't noticed before now, and I like it, especially in short yardage spots.

Marcus Temple certainly came out of nowhere today, even stopping Tebow on 4th and 1 to ice it. It is rare for me to have to check my program to see who a player is when we're five games into the season, but his playing time today was a real surprise.

Kentrell Lockett. That is all.

Overall, the team still showed a lot of youth and a little hesitancy with the game within their reach. I was more than a little disappointed in the 3 and out by the running game at the end that forced a punt and eventually put Florida just a 51 yard field goal away. Two first downs there, and Tebow doesn't touch the ball again. Still, the plays were made, the Rebs won, and there's no taking that from them. I'm glad we get a home game against a weaker offense next Saturday. I don't think you can expect two weeks of rabid defense from a team still learning to win, so I'm counting on the offense building on their success in this upcoming game. Good weekend indeed. The Rebels are back. Hotty Toddy.