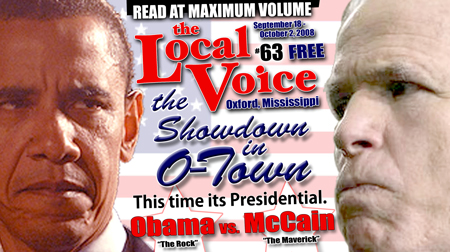 TLV number 63 (hey, that rhymes!) is out. If you're in Oxford, pick up a copy. If you're not in Oxford, click the image for a .pdf. Our column is below.


This Saturday marks the Rebels' conference opener in what might be shaping up to be the craziest SEC season in recent memory. Let's look at the storylines: Georgia is talented, but hurt, and has looked unimpressive at times despite a #3 national ranking. LSU, Florida, Auburn, and Alabama are all in the top 15, but have all had moments uncharacteristic of an SEC champion. On the other end of the spectrum, every team (save Arkansas and State) has shown promise. Kentucky and South Carolina have stout defenses, and this week's Ole Miss vs. Vanderbilt matchup looks like it means something for the first time in this young sports bloggeur's lifetime.

Ole Miss sits at 2-1, and with a look at the remaining schedule, will easily be favored against ULM, Arkansas, and State. The rest are toss-ups at best, which makes this conference opener the potential difference in a bowl bid and another year in the cellar. We could win eight or nine, and we could win four or five. I say Vanderbilt is the turning point.

Yes, Vanderbilt is the turning point. Why so, you ask? Marinate in this one for a minute or two: Our last SEC victory was In November of 2006. Sarah Palin wasn't even the Governor of Alaska in November of 2006. Not only would an SEC victory spell hopes for our remaining season, but it would also show our fans, recruits, and boosters that Coach Nutt and company have this program on the right track.

This game is also significant for Vanderbilt because the Commodores find themselves in a situation they haven't encountered since Jay Cutler was a senior. At that time, Vandy came into the game against Ole Miss 3-0, walked out 4-0, lost a lot of games, beat Tennessee and then lost to MTSU in the final week of the season to fall short of bowl eligibility. If there was ever a team with less luck than Ole Miss, it is Vanderbilt. If Vanderbilt wins this matchup, they will once again be sitting on a pretty 4-0 record and, due to a televised win over South Carolina, be nationally ranked for the first time in a geological era.

While the season is too young to really know what to expect from either team, you have to like the fact that Vanderbilt has been passing for a pedestrian 84 yards/game. Nickson has been excellent on the ground, but with an increasingly healthy defensive front, Vanderbilt will hopefully be forced to take some chances in the passing game, which could lead to (fingers crossed, everyone!) an interception or two. On offense, things are a little stickier (not Brent Schaeffer, sticky, mind you): Vanderbilt has generated a lot of sacks and interceptions this year, which could force the Rebs to play closer to the vest, or risk making more costly mistakes. I do like our chances to make plays with the Wild Rebel, as long as Dexter McCluster and company continue to protect the ball. Brandon Bolden's continued emergence will also be important, as Vandy's front seven lacks the muscle of the SEC elite. Furthermore, if Jevan Snead plays like he gives half a damn, a la the Wake Forest game, there is no way the Commodore defense will keep us from scoring early and often.

Rebels, let's get this win. Let's remind Vanderbilt that their place in this conference is more defined by SAT scores and endowment dollars than wins and losses on the gridiron. Let's send Chris Nickson, Bobby Johnson, and the rest of the 'Dores back to the Music City with their first loss of the season while earning our first conference victory in nearly twenty-two months. Be there, be loud, be proud, and hotty every last toddy.