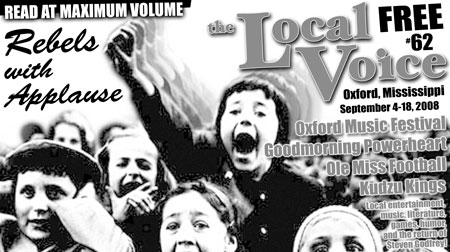 The Local Voice #62 is out now! Snag a copy if you're in Oxford, click the image for the full PDF, or, if you're only interested in what we've gotta say, read below.

If you are the head football coach of a mediocre football program or worse, the best piece of advice we can extend is that you contact Houston Nutt immediately because the football gods seem to smile on those floundering gridiron programs that make the gutsy decision to play the eternally former powerhouse Rebels.

Take a look at Gary Pinkel, head coach at Missouri. One can picture Gary’s high school gym teacher admonishing a young Pinkel as he failed to complete the desired number of pushups quickly enough – "You’re a loser Pinkel; Pinkels have always been losers."

He was not quite a loser in his first five seasons in Columbia, but he was close with a very pedestrian 29-29 record. Then he scheduled a home-and-home with Ole Miss, during the second year of which his Tigers went 12-2, came within a win of playing the national championship game, and won their first New Year’s Day bowl game since the Sixties.

Or take a look at Tommy West. While his record against the Rebels hasn’t been haute, Memphis’ football fortunes, generally, have improved since the Tigers and Rebels renewed their series in 2002 after a two year hiatus. During that span, Tiger High recruited the best player in the history of their program and went to bowl games in consecutive seasons for the first time.

Nobody, though, says overnight success story like Jim Grobe. Coach Grobe is in his seventh season as the head coach of the Wake Forest Demon Deacons. Wake was one of those truly terrible programs that maintained its pride only by reminding itself that there were conference rivals like Duke who were perennially even more inept (and you can just keep your pot and kettle to yourself because our black asses won national championships that ain’t going away).

But the magic happened for Wake, and it happened when they put Ole Miss on their schedule. You might remember saying to yourself before the 2006 season (you know, the last time anyone without George W. Bush-sized delusions thought the whole Orgeron experiment was going to turn out well) that "My goodness, we’ve got something less than a murderer’s row of hapless teams on our schedule. I mean, hosting Wake Forest at home is a slam dunk, right?"

As a matter of fact, we got treated to Parchman-style bathroom hospitality at the hands of the eventual ACC Champions. And this year, with practically every "legitimate" ACC team having embarrassed themselves in the opening weekend (except for Wake Forest, who treated Baylor as Baylor ought be treated), the Deacs look poised for another run at glory. And this for a team for whom "glory" used to mean keeping the Homecoming game respectable.

And, of course, the football gods (their name is Spurrier, proclaim their name to the masses) must still be at work. Because as the stars line up for Wake Forest in 2008, they host on Saturday the rabbit’s foot stuffed with four-leaf clovers of football scheduling – the "crazy in more ways than one" football firm of Nutt, Snead, and McCluster, PLLC.

So, we’re doomed (damned?) right? Not so fast. The pinko liberal hippies that have enough time between not working and not conforming to read a free newspaper that employs volunteer writes in some sort of journalistic circle jerk ought to know that there is no god. At least not one in football. I mean, if there was a football god, he would be a just and fair football god, and would have done something about LSU a long time ago.

But, clearly, there’s not. And that means we make our own destiny. So, put that magic wand in your stinkhole, imaginary football fairy godmother/wizard/deity thingy, because Ole Miss is tired of facilitating your Cinderella game. Dexter McCluster is the Richard Dawkins of football, and he’s setting his watch for midnight.