Spirit and Rivals posters go goo-goo and gah-gah over the Wild Rebel. They yammer on and on about how Coach Nutt invented it, Sugar Bowls, Gerald Pow, etc etc.

Arkansas fans disagree. According to them, Gus Malzhan invented the offense, thus making him the single most brilliant coordinator Arkansas has ever hired. In fact, Arkansas fans love Gus Malzhan so much that they're secretly pulling for Tulsa on November 1 (it'll just be one more thing to hold over HDN's head).

Well, according to The Slophouse, neither man "invented" anything, but rather put modern twists on a decades old offense. The Wildcat/Hog/Rebel/Dolphin/Raider/LadyVol is nothing more than a fancified single-wing offense with a triple-option.

"Wait a gosh-darn minute," you may say. "How can this Arkansas site be so certain that Malzhan didn't invent this offense?"

Well, here's what Malzhan himself had to say about his supposed invention:

Who's been saying this all along? This guy, right here.

Post Scriptum - By the way, I do know what Houston Nutt did invent: the LOLCat offense! 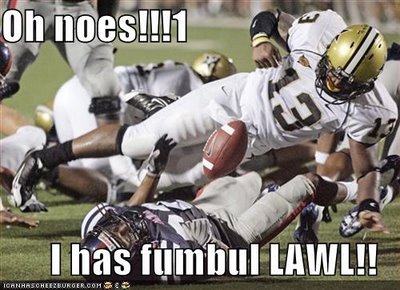