In the last two weeks, Jevan Snead has thrown zero touchdowns and 6-and-a-half interceptions (it's a good thing Mike Wallace is from New Orleans and therefore willing to steal things snatch balls from the possession of defenders). Without these interceptions, one could fairly say the Ole Miss Rebels would currently be sitting on a 4-0 record and a national ranking. Instead, we're forced to endure yet another 2-2 start based more on "what could have been" as opposed to "what actually happened."

Aside from the interceptions themselves and the general cock-tease that is Ole Miss athletics, the most frustrating thing about this young season is how well we've played in certain aspects of the game while sinking in others.

Early on, against Memphis and Wake Forest, we struggled greatly along the defensive front and allowed our opposing runners and passers more time than they deserved to make plays. Against Vanderbilt, though, our defensive line played like a pack of rabid wolves. The only mental image I'm hoping to retain from Saturday's gut-wrencher is Greg Hardy knocking the shit outta Mackenzie Adams.

Along those same lines, our offense looked golden against Memphis and Wake Forest. We made plays using misdirection, kept the defense on their heels, played with relatively few mistakes, and put up serious numbers. Against Samford and Vanderbilt, we may have put up some numbers and looked good a times, but we were anemic overall. The offense had its moments, but then imploded after a few fumbles and a half-dozen interceptions. The interceptions were certainly inexcusable. Most of the throws were either in desperation, poorly decided upon, or simply put in a position where the defender could make a play out of it. Against Memphis and Wake, Jevan made several throws which were placed where only his receiver could make a play. Against Samford and Vandy, we saw a completely different Jevan.

Jevan, where in the hell are you? Come back. Did you decide that a two week CWAB binge was in order? Is that Ethan Flatt under your helmet?

Check out the last four weeks of Ole Miss football: 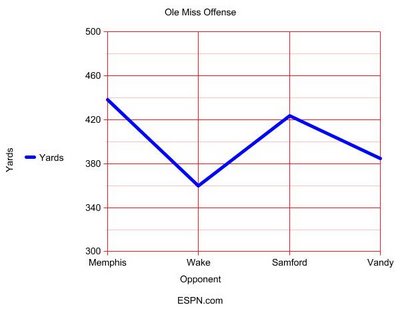 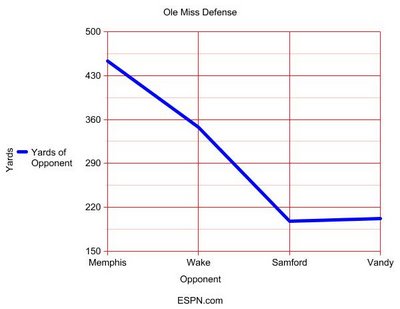 The increased health of our defensive line seems to have an inversely linear relationship with the offensive output of our opponent. Vandy barely mustered more yards than Samford against us. How in the hell do we not win this game? With our defensive line being completely healthy, we win that game 9 times out of 10. Unfortunately, that 1 time where we lose came last Saturday.

Let's get it together, Rebels.